“If I ride the wings of the morning, if I dwell by the farthest oceans, even there your hand will guide me, and your strength will support me.”  Psalm 139:9-10 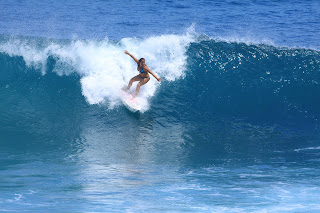 A chorus of chirping geckos and parakeets pulled me from my dream world.  I scanned the horizon from the top of the cliff, and as the sun dissolved my drowsiness, I remembered it was Easter Sunday back home even though it was Saturday here in Bali.  My family was all together, and I could see  them getting ready for church, eating hard boiled eggs and wearing the same pastel colors the eggs were painted in.  My four-year-old niece would be digging through a basket filled with strips of green, filmy grass and candy left by the Easter bunny.  My mind played back memories of my sisters and I as kids; we raced around the yard searching for plastic eggs my dad hid after stuffing with money and treats.  I called via skype from an internet café perched on the cliff-side that overlooked the shallow, barreling wave of Bingin.  When my mom answered the phone my bottom lip quivered and I couldn’t hold back the tears; I was finally homesick after three months of traveling.  It hurt to picture them all together without me, and the gravity of this holiday and what it meant hit me.


“For God so loved the world, that He gave His only son, so that no one would perish, but have eternal life.” John 3:16.  Easter celebrates the completion of God’s plan, the resurrection of Jesus Christ, and the fact that He rose from the dead and conquered death.  Without this event, Jesus would be no more than a prophet, and I would still be searching for the purpose of my life like a dog chasing its’ tail.  When Christ was crucified, the disciples scattered, they didn’t know what to think, and they feared for their lives.  But on Easter Sunday, Jesus appeared to them and they became fearless and risked everything to spread the good news.  They faced opposition in the form of beatings, imprisonment, rejection, and martyrdom, but they never compromised their mission.  These men would not have given their lives for something they knew was a fraud!  They knew Jesus was alive, and they wanted to tell others about the free gift of eternal life.  We don’t have to fear death, because we can know we will be in heaven and live in God’s presence forever, and there he will “wipe every tear from our face.”  Easter proves how God loves us and values our souls that He created for eternity. 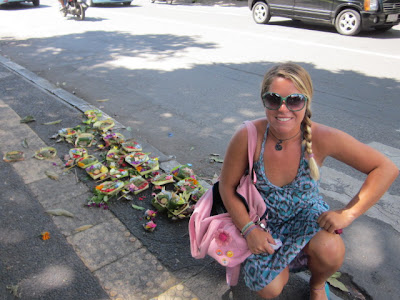 In Bali I stayed in Kuta and then Bingin, a five minute drive from the famous waves Padang Padang and Uluwatu.  The prevailing religion on the island of Bali is obvious upon arrival as Hindu gods and goddesses are elaborately carved into stone on walkways leading to the beach, on the corners of buildings, temples, and doorways.  Barong was the god I noticed the most.  It resembled a combination of a lion and a tiger and is believed to have protective powers to drive out demons.  The sweet smoky scent of incense remained ever-present on the offerings to the gods that are literally scattered everywhere.  There were so many on the ground that I had to pay close attention when I walked to avoid stepping on one.  The offerings consisted of miniature palm-frond baskets that contained the burning incense and variations of candy, cookies, jasmine rise, flowers, and small toys.  I wondered if children ever stole the candy out of the offerings, because I know I would have been tempted. 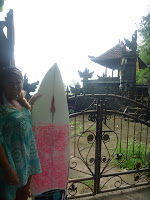 After a week or so in Bali, the most tourist ridden island of Indo, we decided it was time to go off the well-beaten path.  That was how on that Easter Sunday, I woke up with a cramped neck and my body contorted in a ball on two seats inside a ferry.  Even though I surfed some of the best waves of my life over the past few weeks, a piece of me was missing. There was no sunrise service, no blasting worship music, and praising God with other believers.  There were no Easter baskets filled with jelly beans and chocolate bunnies, no pink hard boiled eggs, or Easter egg hunts.  Time and distance found me in a world where this day that was sacred to me, was just another day for everyone else.  I was in the middle of a surfer’s paradise, in Indonesia, and I just arrived on the island of Lombok from the island of Bali. 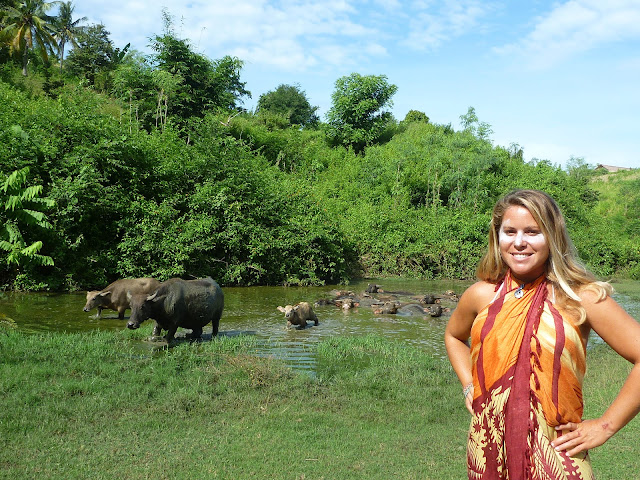 Scoring less crowded waves required the adventure of daring deeper into untamed nature.  It meant traveling on filthy ferries and dirt roads riddled with potholes and muddy puddles the size of small ponds, spending time with mangy wild dogs and monkeys teaming with ticks and fleas, and going to the bathroom meant squatting on the beach.  In Lombok, we watched as bulls and cows cooled off belly deep in one of the murky, muddy ponds on the side of the road.  From time spent living in Nicaragua, I had grown fond of the smell of burning trash, and the scent became nostalgic.  The sight of motorbikes carrying multiple people, sometimes a family of four, felt familiar.  The tropical vegetation and tropical heat, the free roaming cattle, the men walking with machetes, felt like home.  We passed a village similar to one I visited in Managua, Nicaragua where people lived in homes constructed of black trash-bags on the way to the surf. 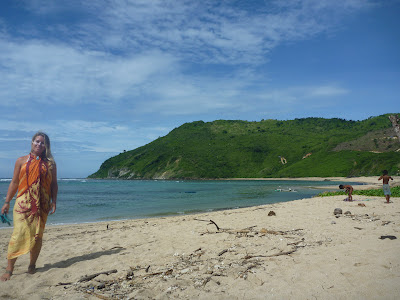 Lombok, and all of the other islands in Indo besides Bali are Islamic.  As we drove through a small village I heard a man’s voice; flowing Indonesian words that equated to a ritual call to prayer.  The chanting came from loudspeakers on the highest points of the mosques.  A hollowness swallowed my spirit as I longed to pray with other believers and bask in the triumph and joy that Easter represented. The first reef we visited was known to offer a left and a right, but when we pulled up to the beach we discovered only the right was working with the current swell direction.  The other surfers I was traveling with decided to wait and surf at the next spot, but I couldn’t resist.  I had been surfing mainly left breaks, and was stoked to have a right.  The three other surfers I met in the water were friendly and we chatted and shared waves.  The horizon carried a calculated rhythm of peaks, and when the translucent water twirled over the reef, the wave rose to over-head.  It only took a few paddles and I made the steep drop and tucked into a quick barrel that opened up with a racing wall perfect for turns.  The other surfers had been in the water for a few hours already, so before long I was alone in the water with God.


I felt so grateful to the creator of the waves, and viewed each wave as a miracle and a gift.  His presence was ridiculously lucid and He spoke to me through the waves.  One wave filled me with peace over my homesick heart; the next covered me in His overwhelming, unconditional love.  Another wave I felt Him reminding my soul that no matter where I was, He was with me.  The next wave He gave approached at double the size of the others and I was sailing, speeding, flying down the drop as I felt Him telling me to let go of worry and to trust.  With each wave my soul raced, and I felt Him telling me to dance and be free.  Every wave was God’s hand, wiping away the tears and emptiness until the sadness in my soul was replaced and overflowed with joy and gratitude.  In this sanctuary I sang to God and prayed.

The boys searched through static to find a radio station as we drove to the next surf destination.  We were going to take a boat to another reef where the wave broke next to a huge rock wall.  There was only one station that came in, and the voice of Michael W. Smith sang, “I will be here for you,” breaking through the static.

No matter where I was in this changing world or what was going on in my life, what He did would never be negated.  His unrelenting, perfect love and promises were constant on Easter Sunday and
everyday. 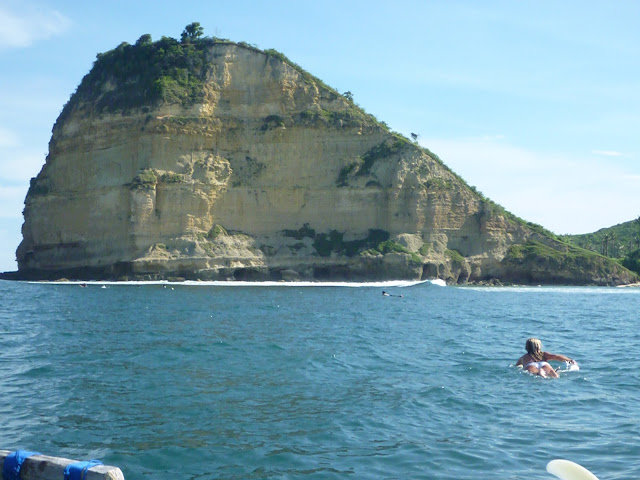