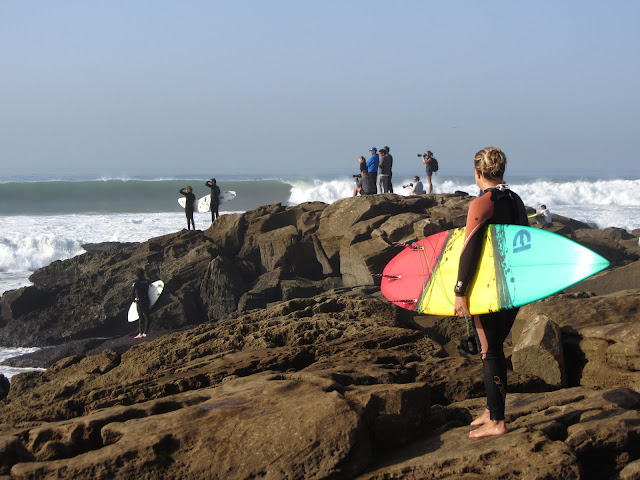 Linzee, one of the first people I met in Morocco, whisked Sophie and I into her car and navigated gridlocked, vertical alleys. Once outside Taghazout, we flew down the middle of the road trailed by clouds of dust that flew in a swarm.  I was transfixed by her fast wit, natural command of the road, and flow with the culture that revealed much time spent here. 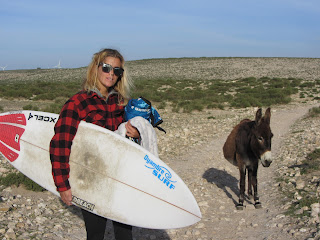 We surfed at Killer’s, Sophie’s favorite spot named after Orca whales seen in the line-up as they migrated by. We side-stepped in between rocks down a small cliff, and I followed the girls across a beach and then through chilly, knee-deep sea foam. We walked around large boulders and then through a cave with water surging through. Rays of golden sunlight spilled into the caverns through tiny openings. Part of me wanted to linger in the mysterious grottos, to splash in the tide pools and explore the stunning rock formations. Caves were nonexistent in Florida; a geographic anomaly that existed only in my imagination and books until that day. But the deeper part of me, the yearning in the pit of my stomach where an intense magnetic pull towards the surf thrived, lulled me out of the marvelous cavern and into the sea. 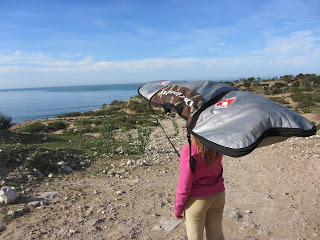 Later, Sophie suggested a visit to the Hammam, a bathhouse, where local women of all shades and shapes accessed hot, running water. Between these walls they were completely free of all their coverings and completely comfortable in their bare flesh. Conversation flowed as the women took turns scrubbing and massaging one another. Laughing grandmothers lathered shampoo into their granddaughters’ espresso-black hair.  Little girls filled big buckets of water their mothers washed them with.  A few of the small girls walked by Sophie and me staring with curious, big brown eyes at our peculiar peach skin. We smiled at the girls, relaxed by the warmth of the steam and calm, leisure atmosphere. “It’s healthy for us to see each other like this. To see it’s normal to not be perfect,” Sophie said bringing fourth an interesting point. In our western culture, women were usually reserved about nudity and never bathed together. Yet on a normal basis, we subjected ourselves to popular magazines and publications that displayed half naked skeletal women and photo shopped models with flawless skin and overflowing bust lines leaving us more self-conscious.
During a rooftop dinner I met Ruben, one of Sophie’s friends.
“I was the poorest man, but the richest man,” Ruben explained in his thick Spanish accent.
Exhausted and dripping wet after surfing, Ruben discovered his van had vanished. He lived in it and drove it from Spain to Taghazout. His shelter, transportation, and every possession gone, all except the wetsuit he wore and the surfboard he carried. His animated arms flew in the air, and his eyebrows arched as he recalled the dramatic story of loss and gain. People he barely knew clothed him. One Moroccan, Younes, even drove him ten hours to hunt for and then find Ruben’s van abandoned and stripped on a desert roadside. Then Younes even gave Ruben work at his surf camp, while another local surf shop owner loaned Ruben money.
One evening, we stopped in town with Ruben to share a hot drink with one of those men. Guttural cries poured out of loudspeakers mounted on the highest points of buildings. They sent a beautiful of rhythm of Arabic words through porches, alleys, and store-fronts signaling the routine call to prayer. The steam from the metal pot of simmering mint tea crept up into the cool, dusk air.
The bearded surf shop owner tasted his tea and said, “My friend, I do this for you to help you, not for others to see. God has given me enough to help others, and so I do. I don’t do it because I expect you to repay me, or for recognition. It is about brother helping brother.”
He received Ruben’s firm hand shake. Ruben kissed the man on both of his cheeks; his actions speaking respect and appreciation.
“I must go to pray,” the man said and hurried away. 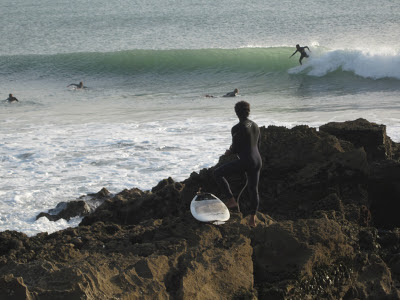 As Inshallah, the Moroccan phrase for God’s will, would have it, Sophie, Younes, Ruben, and I formed el ekipo, meaning ‘the team,’ in Spanish. El ekipo was on the hunt for adventure, uncrowded waves, and places less traveled. Younes was our GPS, and possessed local knowledge and fluency in multiple languages. Ruben was our driver and maintained a charm that could get us out of any sticky situation. Sophie and I were the fuel, energizing the team and helping with every move.
El ekipo traveled north and surfed in front of a cathedral as the coral sun dropped below the horizon, and although the waves were distorted by wind, we were nearly alone in the water. After peeling off our wetsuits, we capped off our first session with toasty, hot mint tea that warmed our numb fingers. Over the next days we ventured further north to surf a river-mouth and then at a certain wave in front of a cave.
This wave required a long walk through diverse terrain. A local allowed us to park near his home, and then we wandered down a gravely, dirt path that framed an endless seascape. We traversed a hilly desert, where a donkey joined el ekipo for the journey. Overwhelmed by the personality of the donkey’s sly grin, the immeasurable view offered by the high cliff, and the glistening ocean, I thanked God for His creation. The verse Psalm 33:5, “The earth is full of His love,” replayed in my mind. 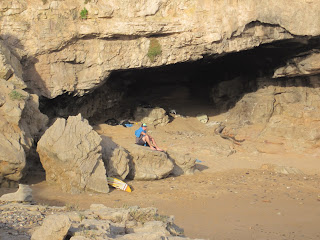 At that break, Younes spoke Dutch to two surfers who were paddling around others and taking almost every wave. After Younes spoke, the guys stopped being so aggressive and waited their turn. Sophie and I soared across the seamless, glassy right point that allowed turn after turn. I asked Younes what he said to the guys, and he responded, “I just told them to act like gentlemen and let the ladies have some waves.” I was smitten and spoiled. 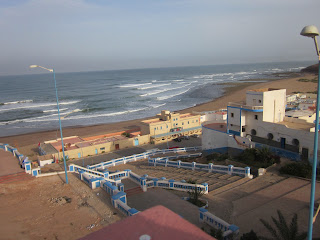 El ekipo headed south after learning about an approaching swell. Younes’s friend, Oscar, ran a surf camp where we stayed and found some of the best waves yet. The friendliest locals I ever encountered hooted and hollered Sophie and I into overhead peaks. Oscar, a celebration in the sea, caught the biggest, fastest set waves on a longboard. He would drop in, and then sit down on the board, steer it through a barrel section, and then stand back up. He smiled and laughed, threw enormous cutbacks and then sat down on the board with equal amounts of style, skill, and stoke. Oscar entertained the eye and his contagious joy flowed to the soul. We shared waves by day, seafood feasts and mint tea by dusk, and then songs, instruments, and laughter on the upper roof surrounded by stars. Fully spoiled.
Inshallah brought colorful characters across my path like spunky Linzee, resilient Ruben, and a generous surf shop owner.  People who breathed the life into a place like smart, charismatic Younes, warm and friendly Oscar, and thoughtful, loving Sophie.
I am thankful for the days when ‘normal’ was drinking mint tea in a tent overlooking villages nestled in the distant hillsides after shopping at the souk with Linzee and Sophie. When normal was surfing with Ruben and Younes, strolling with a smirking donkey, and planning to camp in a cave. I look forward to returning to that rustic, rugged place I am free to explore the sea, the road, and where they collide. Inshallah! 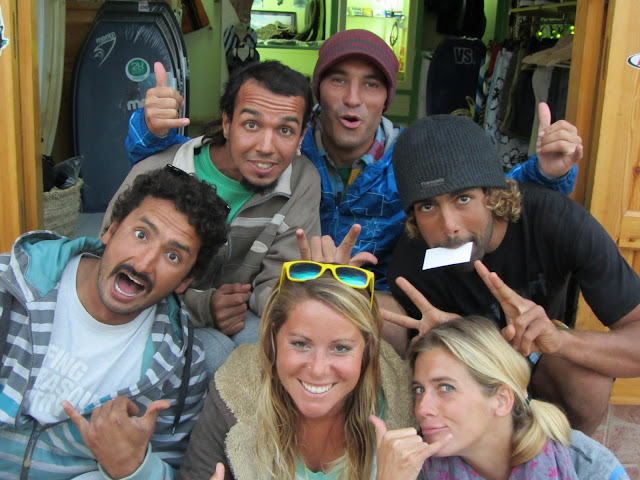