An immaculate wooden boardwalk wove through thick, tropical Australian bush framing a series of turquoise reeling right-hand point breaks.  I stayed in a picturesque, historic hostel nestled on a hill with a view.  The wrap-around veranda was surrounded by countless species of plants and trees, and I even scored a bottom bunk.  The town was quaint and elegant; complete with an Indian restaurant and a few artsy, retro surf shops.  In theory, I couldn’t invent a place more ideal for my taste. 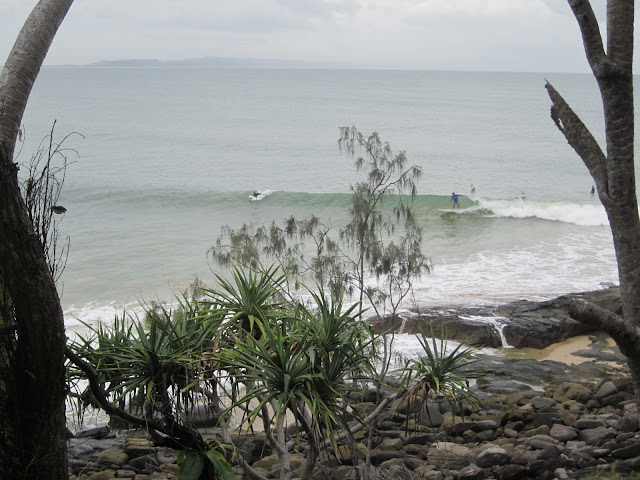 I arrived late in the afternoon with only an hour of daylight left.  After a ten-hour bus ride I craved rejuvenating saltwater.  I threw my bag on my bed, screwed my fins into place, and darted off towards the sea in search of a wave or two.  A national park protected the beaches with four right points, and I jogged down the walkway peering between eucalyptus and other gum trees hunting for peaks.  I stopped at a spot called the Boiling Pot.  There were a few older men surfing and dropping in next to a rock wedge that created a fast peak.  They shared waves with me and encouraged me to go deep and take off close to the jagged rocks.  As the darkness lingered in, I made a sketchy exit through craggy rocks and walked back to the hostel on the boardwalk in awe.  I was sure I would fall madly in love with Noosa. 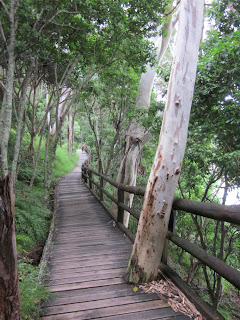 The hostel where I stayed was full of travelers from all over the world.  I chatted with people in the kitchen and on the veranda, but I couldn't find any surfers excited about the waves and getting into the water.


I slept in a small girls’ dorm with two bunk beds.  Pink and yellow stained glass windows filtered an amber light illuminating the small room.  I introduced myself to the girls, but they were not interesting in surfing or me. They answered my questions with short responses, yes or no, and then returned to talking in another language.  One day, as I was on my way to do some shopping, a guy staying there asked to join me to learn where the grocery store was.  As we walked, he showed me a tattoo on the bottom of his tongue that marked his religion.  He believed we lived on branches of a giant tree.  He said he deeply hated Christians, and when I bought a peach at the store and began to eat it, he told me he was offended.  He said it was against his religion to eat in front of others without giving them food as well.  I felt so bad for offending him, bought him a peach, and hurried back to the hostel.
In the water and in the surf shops the locals kept to themselves.  I was used to meeting at least one person to have adventures with, but this time I was happier to pass the time alone than with the people I had met. 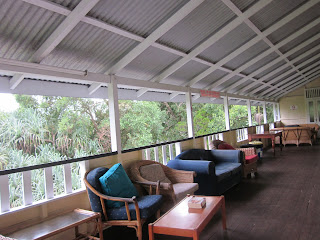 Despite my lack of friends, the conditions were optimal.  I didn’t have to work and my life revolved around coffee, yoga, surfing, running, reading, writing, and eating.  I had two shortboards with me, and could easily rent a longboard at a surf shop at the bottom of the hill to ride smaller waves.  I surfed each point and spent about 5 hours in the water each day, going from one point to the next and then surfing my way back through them again.


Isolation is a part of a writer's life.  I need it to a degree; to withdraw from others to collect my thoughts, reflect, and organize them into words.  I love to get lost in books.  But I also love people, and especially surfing with friends.  It could be friends I knew for the past three minutes, four hours, five days, or six years; just someone to enjoy the conditions with.


There is nothing better than surfing with friends.  Riding a wave to its’ full potential, feeling its’ pulse, tucking into a barrel section, getting spit out, and turning with such precision that you throw your fins out of the wall, and then making a clean exit while friends witness the magic, the moment you morphed into a pro for just one wave.  Feeding off each other’s energy; getting sprayed by your friend’s power turn, and then laughing about the serious face of another surfer paddling for a pounding peak.  Sharing the awe of the colors of a sunset or rainbow, the wonder of seeing dolphins surf and turtles swim, and anything God sends in between is so much better with a friend.  I love eating dinner later on and laughing about it all over again and making a plan of attack for the following day.


After spending a week in Noosa, I sat on a bus heading to back to Surfer’s Paradise.  I didn’t feel nostalgic or sad about leaving.  As I sat on the bus, I watched the ocean and trees fly by, and I flipped through snap shots of my last few months that filled the memory card in my Kodak camera. 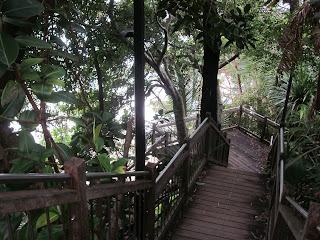 My heart felt warm seeing photos with Betina in Sydney.  Laughing over stupid things with Sacha and Josh and how he took me to south Stradie like a local, paddling across the shark infested channel refusing the easy boat ride.  Thoughts of the concert, my time with eagle Dan and Nolan in Byron Bay, the Rocks, the old Irish part of Sydney with Shane and his incredible curled mustache all flashed through my mind’s eye.  I wore a permanent grin.  I was greeted by the smiles of Anna and the boys in WA.  My New Zealand photos were full of beautiful, warm people I was so blessed with; Rachel, Caroline, Stacey, and then in Raglan Julianne, Danny, Peter, and Jan. Time with those people was so rich.  It occurred to me that a shared experience creates unforgettable moments; memories make friendships timeless.


The Bible confirms the importance of companionship in Genesis 2:18, “Then the Lord God said, “It is not good for man to be alone.” (so he created Eve)  Time and again I learn that there is more to life than surfing, that even when the most intense beauty and quality waves surround me, loneliness can exist.


Noosa was one of the most beautiful places in Australia I had seen, but it meant nothing to me because I had no one to share it with, and in retrospect it feels as if that space in time did not even exist.  However, I am thankful for the opportunity I had to surf and explore it.  Up until this point I was willing to go anywhere by myself, but then I learned it is not where you go, but who you go with.