Love One Another Even in the Line-up: Bocas del Toro, Panama 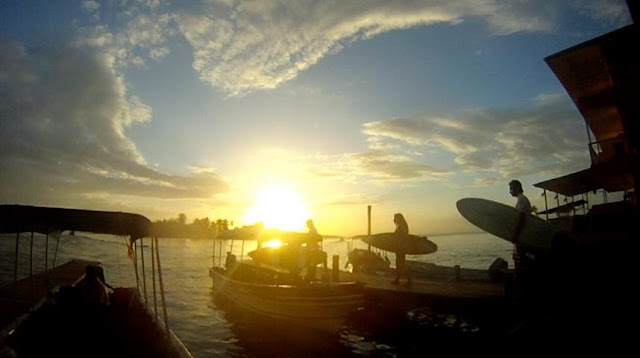 The clouds filtered the first rays of light as we stepped onto the boat that morning.  We flew over the crystal, translucent sea to the point and leapt into the line-up at 6:36am.

In the saltwater I was fully awake and fully alive, witnessing the magic of a six foot, ten second period swell.  The left reeled, connecting in perfect precision with a barrel section.  We joined five others in the water who I had shared waves with before, and I knew all their names.  I cheered for Hannes, as he took off deep, got barreled, and rode the wave to its full potential disappearing deep inside where the reef got shallow.

I lined up with the waterfall and the next set wave broke wider; the peak chasing me.  Joan and Juan David shouted for me to take it.  I did.  I rode the fast, pitching wave all the way as if in a trance.  It felt like a dream when the moment I paddled back to the line-up another perfect peak came right to me.  I took it again in the same state of nirvana.  It seemed too good to be true when the same happened after I paddled back again to meet another seamless, overhead wave that offered two barrels!  It was 6:52, and it was already the best day of my life.

My heart, soul, and mind thanked God for the gift of surfing, and I watched my friends catch waves as I awaited another.  I admired the love birds that filled the sky in Bocas del Toro, Panama.  They chose a mate for life, and soared in pairs between the clouds and bright beams of light.  They flew free, sharing the joy of gliding along through paradise.  I felt a connection to them as I soared, flying free down the face of a wave.  In those pure moments nothing mattered as I glided over the surface of the sea and returned to smiles and laughter of friends.

Then a boat of four surfers pulled up.  They jumped into the water and sat all around me.  A set rolled in, and I saw panic in the eyes of one of the girls.  I couldn’t go for any of the waves because I was surrounded by them and would have run them over.

The next boat carried five surfers who paddled straight to the peak.  The entire vibe in the water changed.  The celebration of tube riding and wave gliding with friends transformed into war in a matter of minutes and a few boats.  For every wave, at least five surfers paddled for it and someone dropped in on someone else.  The next boat arrived, and four more surfers jumped in and sat right next to me.  When the next wave came my direction and I was in the peak, and a guy paddled around me and snaked me, putting me right under the lip of the next wave of the set.  I almost got hit with the boards of all the other scrambling surfers around me.

It was 7:15 when the next boat arrived dropping another five surfers into the water, and I moaned and shouted to Joan, “Seriously?  Noooooo!”  I was annoyed with each new surfer.

I managed to catch more waves while I was out there, and miraculously dodged numerous collisions with the other surfers fighting for waves.  By 8:30, when our boat arrived, I was happy to leave the water.  There were at least 40 people in the water by then.

I realized as I sat in the water, aggravated with every new surfer entering the sea, I was forgetting the most important thing I am called to do as a follower of Christ.  Love one Another.

Matthew 22:35-39, “One of them, an expert in religious law, tried to trap him with this question, “Teacher, which is the most important commandment in the law of Moses?”

Jesus replied, “You must love the Lord your God with all your heart, all your soul, and all your mind.  This is the first and greatest commandment.  A second is equally important: ‘Love your neighbor as yourself.’

This is known as the greatest command.  The Bible even says that there is nothing special about loving your friends, because everyone does that.  The true challenge is to love others, not just your friends, and even takes it further, but to even love your enemies.  Christ teaches us to love in an extreme manner; revolutionary style. 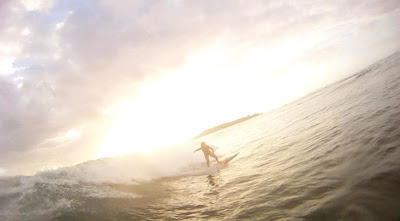 Normally, when I translate God’s commandments to my life I think I’m doing pretty well.  I’m a pretty loving person, and I truly do love people for the most part.  That day I realized that in the thing I love the most; surfing, is where I am the most tested.

Of course this is a good commandment, imagine how harmonious the line-up would be if everyone acted as if they loved one another?  People would take turns, and there would be no such thing as dropping in or snaking.  Just imagine!