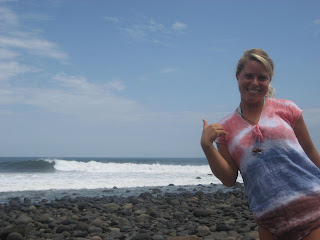 In my mind’s eye, I can still see Jimmy getting barreled twice at Punta Roca, threading the frothing wave like a needle.  I remember the stagnant heat and noise of a local bus rumbling along and then halting to a stop, and the thrill of being launched into a spitting tube in El Zonte.  I can still even taste the delicious, fresh pupusas that satisfied my craving after hours of surfing.

After hearing tale after tale of Punta Roca, one of the longest, reeling right-hand point breaks in the world, El Salvador never escaped my thoughts.  Surfers relayed stories of a regular foot’s front-side paradise that left me drooling and my heart aching to go.  One summer, that dream evolved into reality, and I surfed more than just Punta Roca, but also K-59, El Zonte,  Sunzal, La Bocana, and an area known as San Blas with some locals. 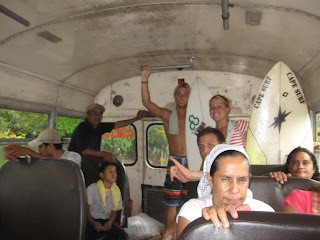 In El Tunco, where I stayed, I could walk to three different waves.  But within a twenty mile radius of El Tunco, were multiple right points just waiting to be ridden, so we took advantage of the local bus system that charged only 25 cents to ride.  The coolest bus was the one with a mounted flat screen television that featured hip-hop videos.  Next to the rear-view mirror was a sticker with a bus in a huge blue barrel.  Paved roads hugged the coast, and coupled with an efficient bus system made this region simple to navigate.  The curvy coast offered stunning views of a mountainous rainforest, and from the bus windows, I caught glimpses of the surf peeking through clearings in the green canopy.

Our first bus ride we ventured to El Zonte, a small and raw surfing village.  There was a powerful rip current on the inside because of a drastic contrast from deep water to a shallow shelf.  There the wave sucked up, barreled, and broke with authority.  The outside was super fun and involved a jacked up, fast drop, and then allowed some turns and cutbacks before it walled up and threw me into the green room.  K59 was a similar wave, and I loved them both.  I even scored some decent surf at Punta Roca, and came away with only a few scrapes and cuts from getting slammed on rocks in the shallows. 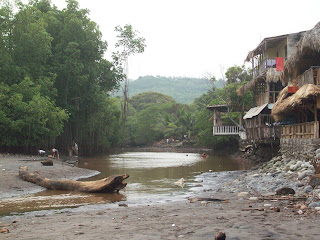 I also feel in love with pupusas; thin tortillas that were delicately filled with beans and cheese, beef and cheese, or all three.  They went for 35 cents each, and were served with a little plastic bag of cabbage salad and salsa.  I got stuffed eating three!  The chicken soup I ordered at a local restaurant on the beach in La Paz had four feet floating in the light broth, because the feet of the chicken held the most flavor.  I remember holding one in my hand and touching the random, wiry, hairs on it, and even though I never ate one, I loved it.  I drank fresh squeezed juice, and laughed with my new found friends in a mixture of English and Spanish, different accents and dialects; the variety I lived for.

One of my last days in El Salvador, a massive swell arrived just in time for the contest.  The competition was to determine who would represent El Salvador in the Central American circuit.  The buzz on the day of the contest revolved around Jimmy.  Jimmy Rotherham was a legend, a local pro surfer who stole everyone’s attention when he danced with the giant rights.  I didn’t meet one person who was not jealous of the fact that his father, an expat from California, bought the property in front of Punta Roca back in the 70’s.  Jimmy grew up with one of the best point breaks on the earth in his back yard, and it was apparent in his surfing.  He tucked into the barrel with a relaxed ease and then emerged with a swift spit from the wave just to race the steep wall and disappear into another barrel.  That was the first time I witnessed such extraordinary surfing on big waves in person.  I was overwhelmed by the fact that just watching him surf could effect me so much; I was transfixed and inspired. 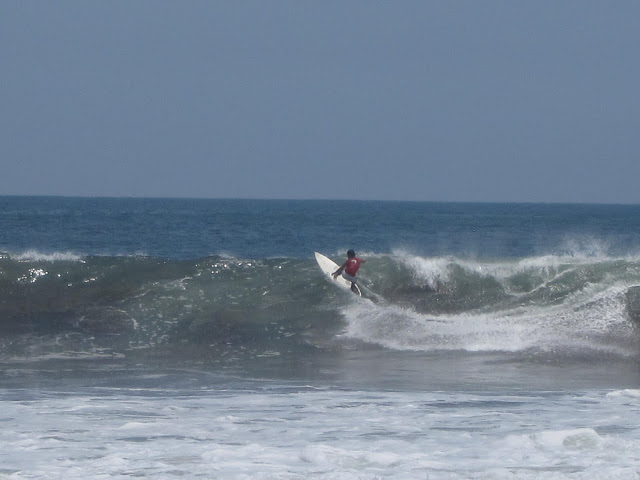