The Road to Playgrounds: Nicaragua 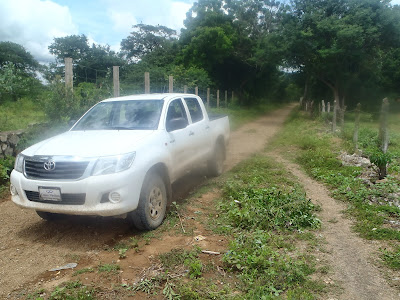 “For it is by grace you have been saved; through faith and this is not from yourselves, it is a gift of God.” -Ephesians 2:8


If it is by faith alone that we are saved, then how important is our faith?  I spent a few minutes meditating on this simple but crucial fact while I sipped Nicaraguan coffee and roosters crowed.  I prayed God would increase my faith and for it to always grow.


We were four surf sisters, and these were the days of our lives.  Down to our last few mornings in this wild country it was time to explore in the Hilux, a trusty four-wheel drive Toyota.  Megan was our driver, Bailey rode shotgun as the co-pilot, and Stephanie and I shared the backseat.  She quietly observed while I was a full on back-seat driver.


We picked up our first hitchhiker, an old, round Nicaraguan woman.  We dropped her off in her village and after spying tiny waves there we decided to venture on down the dirt road.  None of us knew what was ahead of us, but we were committed to explore.  A wooden sign on the side of the road read ‘Chococente’ marking another dirt road, and I remembered my friends said it was a fun beach break.  I told Megan to follow that way hoping we would find the beach.

The road forked, and we stayed to the right only to end up in an overgrown field surrounded by jungle.  As we turned around, a boy ran up to the truck shouting, “Playgrounds, Playgrounds!”  On a boat trip we had caught multiple peaks at the reef break known as Playgrounds and though we had heard a rumor about a road to the spot, we never heard of anyone driving there. 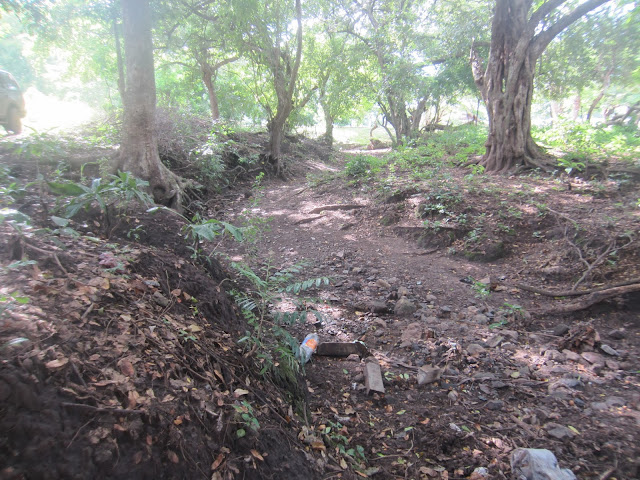 Wedged between Stephanie and myself Jonathan, the boy, and I chatted about our arrangement.  He said his parents would not be worried because they knew what he was doing.  He asked for money to buy school clothes, and I said if he worked we would pay him at the end.  He nodded and told me this was his job; he would guide us to Playgrounds and guard the truck while we surfed.  There was never a debate.  In fact, it was the quickest decision we made.  Hungry for waves and to surf the reef again, we accepted this boy’s proposal.  I was impressed by the young entrepreneur and liked the way he invented work for himself.


The excursion began with crossing through a small river.  Next we ascended a small hill, and the road grew very narrow and there was a steep cliff to the left.  It was clear that after this point there was no turning back.  There was no space to turn around, and the only way back would be to drive the narrow track in reverse.  Because of heavy rainfall the night before the road to Playgrounds was a muddy mess, and the consistency of the mud changed as we weaved through the jungle.  The road was a mystery as we traveled up and down hills covered in giant pot holes and puddles.  Over the years of surf adventures in remote areas I never witnessed a road so dangerous.


As we forged on into the unknown I realized how close I felt to God, because I was aware of my utter and total reliance on him.  I had absolutely zero control, and part of me wanted to panic.  Between prayers Bailey kept repeating don’t drink the water, save the water, and don’t eat anymore Pringles.  Stephanie sat there stunned and speechless.


I prayed and prayed.  Please God, keep us safe, direct us, protect and surround this truck with your angels.  Please make this puddle be shallower than it looks.  Please help us down this steep hill in Jesus name!  I thanked God for making Megan a little bit of a redneck because she was the only one capable of maneuvering this.  I asked him to allow the Holy Spirit to operate through her.  He gave me peace of mind because he promised me he would take care of us.  We were his girls.  I told him over and over if we made it out of this mess it would be only because of him, and he would get all the glory for it.


Megan drove on, attempting to stay on the higher contours of the road, but fish tailed into the ditches.  Somehow she remained calm and kept driving because she knew that turning back was not an option.  It was scary to realize how much we were not in control.  How often do we live under the illusion that we are in control?  It is when we reach a crucial point, when our faith is tested, that we realize we are not, nor have ever been in control at all.  That is when our faith saves us, as we have nothing else but to trust in his mighty hands; the very hands that created the heavens and the earth, the author of salvation.


As we inched closer to our destination we were excited when we passed two different thatched roof homes.  After being so deep in the desolate jungle, evidence of human life brought twinges of hope.  An old man peered at us from the doorway of his house with his forehead all crinkled up; a look of pure shock and confusion.  When we passed the second home a family gathered at the doorway to watch us pass.  Apparently, travelers were not a common sight.


Finally the road grew wider and the soft mud mixed with sand to create firm ground, and Jonathan pointed where to park.  We hiked through the trees and vines with the sound of the ocean easing our pounding hearts.  The ocean glistened in the sunlight and though we reached our goal, Playgrounds, we didn’t find the waves we remembered because it was dead low tide.  The shift in tides is so dramatic in Nicaragua that the waves we surfed at high tide on the boat trip did not even exist now.  We floated around in a tide pool to cool off and decompress before the return journey. 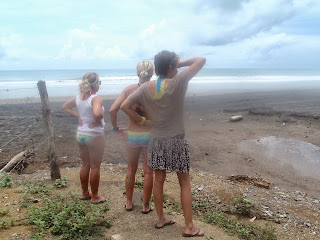 We knew that we couldn’t focus on the past, because at this moment we needed to stay focused on the path to come.  We could only use the past to learn from and to make our path forward better than the past.

As I prayed the word traction came to focus.  I realized that if our tires could not grip the road we would not make it up the steep muddy sections.  I told Megan to stop the truck as soon as we found a safe flat spot.  I got out and dug the layers of caked mud off the tires.  Every twenty yards or so I would ask Megan how her control felt, and when she felt no grip we would get out and again dig the mud out.  We worked under the hot sun while howler monkeys mocked us and howled down from the highest summits of verdant gum trees and various palms.


Rosa, a spiritual woman we met in the north, said that butterflies were a sign of the Holy Spirit’s presence.  Groups of them danced in improvised flutters as we peeled the mud away and carried on down the road.


When we got back to our hostel spackled in dirt the others couldn’t believe we took that road.  Even the locals don’t drive there, especially in the rainy season!


We relied on our faith to get us through, and gave God all the glory.  We were like the small white butterflies that hovered and swarmed around thick mud; happy, wild, and free bursting forth into the sunlight and oppressing humidity as if being born of the mud and emerging only after the rain.