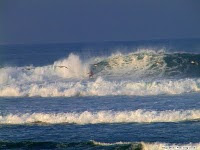 “Where I go, I just don’t know, I might end up somewhere in Mexico…” lyrics from The Red Hot Chili Peppers sparked another song; that of the Mexican sea’s voice among others I couldn’t ignore.  Like the lullaby of smooth cobblestones.  They crawled up the sand only to have their progress stolen by crashing shore-pound that created a soothing beat as they collided and washed over each other, the water sifting, rushing through any spare space.  Craig’s words, “Never seen a shark in these waters, but been chased out by a crocodile,” came next.  The cawing roosters made their debut at dawn, replaced later by cooing geckos and chirping parakeets.  I hear the belly of the rental car being itched on large rocks in the dirt road and on the crests of potholes.  Wild dogs howled at dusk, while warning barks were launched from the lungs of lesser wild dogs, our nocturnal security system, that lived among us on the beach.  “It’s what happens when the squid disappear,” Craig said in his matter-of-fact manner.  His deep voice faded to mingle with sounds and memories that twirled through my thoughts; the substance of a wanderlust mind. 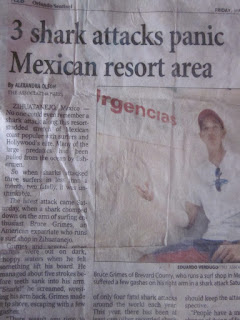 Right before our departure, the news reported a fatal shark attack in mainland Mexico on a surfer from San Francisco.  I knew shark attacks were such a freak occurrence, so they actually made me feel safer.  I believed the odds were against me.  A local, who lived in Troncones for thirty years, where the fatal attack occurred, remarked this was the first attack he heard of.  Attacks were so rare there that a surfer had a much better chance of getting food poisoning or even chased out of the water by a crocodile. In fact, it is far more dangerous driving to the beach than getting in the water. Craig Carroll, the owner of the surf school I worked for, averaged three trips a year and knew these facts firsthand.

May 2008 marked my second surf trip to Mexico, and I felt prepared.  I just completed a Spanish course, exercised and conditioned, and knew the waves I would be contending with.  But during my first surf of the trip, I was not prepared to chat in the line-up with two guys from California who lost their friend to a great white two days prior.

We talked about the various breaks in the area when they told me why I should not surf Troncones.  They were sharing waves with their friend there a few sessions ago, and now he was gone.  I had no words to speak, only sullen silence until finally, I said I respected for them for getting back in the ocean. I wasn’t sure if I would be brave enough to do the same. I told them I was sorry.

“He would have wanted us to finish out the trip. We’re surfing for him.” They were the first ones in the water and the last ones out.
We slept in cabanas on a remote beach that offered a stellar view of the world-class left point. The subliminal calming repetition of the ocean’s pulse never left our heads.

Early one grey morning, I pulled myself out of bed to peek at the waves.  The point reeled, and only two other people were out.  I remembered it was the California boys’ last morning and knew it had to be them in the water.

When I got to the outside, I realized we were still the only ones out. The waves were thundering in bigger than they had before.

“WHEWWWW!” I shrilled as I watched them take turns on the set waves. These waves were the biggest I’d surfed so far in my life, being easily double overhead. I kept holding back. I watched the boys in awe as they disappeared into the wave and then reappeared twenty seconds later way down the beach. At one point, I was in the perfect spot to ride the approaching mountain of water, and they both yelled for me. I knew I couldn’t think about it, no hesitation allowed; just go for it.
“GOOO!” One of the boys cried. 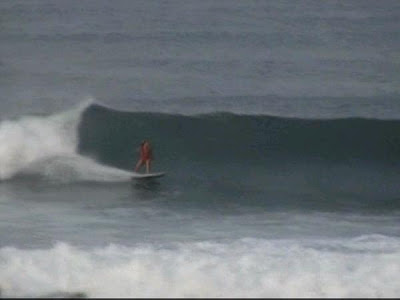 Their encouragement gave me the confidence I lacked. I paddled boldly in full force and threw my body into the wedge of the wave and made the drop.  I flew down the seamless, peeling left.  I carved up and down the face, racing faster than ever. I cut back to the pitching mouth of the wave and continued sailing down the line. The biggest rush of adrenaline I’d ever experienced pulsed through my veins as I paddled back out, yearning for another wave just like that. Even though I caught more waves that day, I knew they called me into the best wave I ever rode in Mexico.  I was in love; with Mexico and the endless walls of water produced by point breaks. 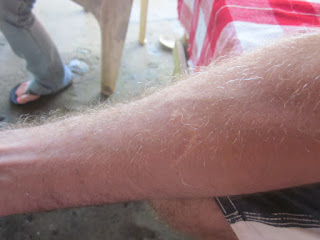 A few weeks after I returned to Florida, a newspaper reported three other shark attacks that occurred days after I left.  Bruce Grimes, a surfer, artist, and board shaper from central Florida was one.  He was attacked at Playalinda, a beach where I surfed alone for hours.  For some unexplainable reason, scientists found that a cold water current flowed south from California bringing many giant squid. The great whites and tiger sharks were in hot pursuit of their prey, making mainland Mexico dining grounds for countless hefty predators. I am glad I did not learn this information until we were home! 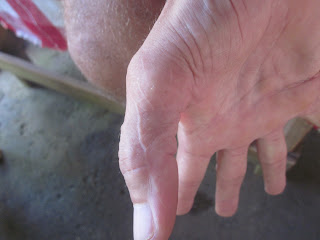 I have proof of what happened when the squid disappeared that spring of 2008.  The glossy, laminated newspaper story with Bruce’s photo and the facts are tangible proof.  Proof, so when memories take flight in my mind and the colors and sounds of fact and fiction begin to mingle as they often do over time, the facts are preserved.  I hear the cobblestones calling, beckoning, luring, me back. 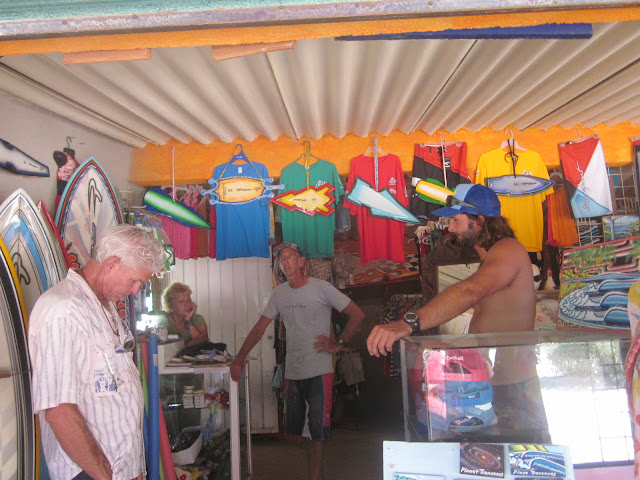