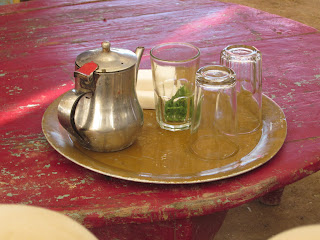 Sipping her hot mint tea Sophie smiled and remarked, “How did all this become normal?”  Normal became walking in dusty streets with women in burkas while goats sifted through trash, cooking meals in tagines, jogging on the beach beside camels, and surfing right point breaks.

As travelers, we threw ourselves into a world thousands of miles from where we started, and a few days later found ourselves at home; accustomed to new sights, tastes, and sounds. 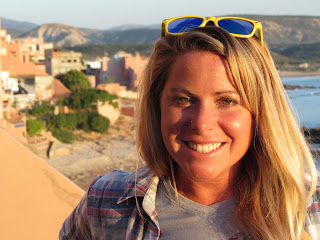 After a 30 hour cross-continental journey, I met Sophie in a small surfing village called Taghazout in Morocco.  I stared out the window on the runway waiting to take off on the final flight of the trip.  The crescent-shaped moon hung so low in the sky and glowed such an intense yellow it looked fake, like it was from a movie set.  I arrived in Agadir around midnight, and as the young taxi driver sped down the middle of the road he told me the names of surf spots, and pointed to a mass of blackness that was the sea.

The sunrise brought an adrenaline rush stronger than ten espressos, as the mysterious world around me came into focus.  The windows in my room gave views of three surf breaks, Anchor Point, Hash Point, and Panaramas.  Plans of surfing each one dominated my thoughts already. 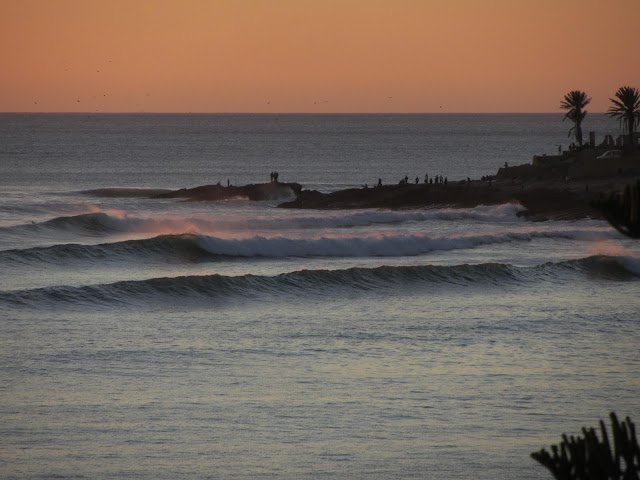 Boiler’s was the first spot I surfed and was a twenty minute ride up the coast.  We drove through gravelly, desolate, desert hillside.  Herds of lambs and goats ambled around the dusty land speckled with argan trees and bushes.  Goats climbed high up in tree branches to chew on argan fruit.

I was warned about the sketchy entry and exit to the break, and it proved to be far from the soft sand and flat beach I was accustomed to in Florida.  I followed my new friends into the afternoon high tide.  I tucked my board under my right arm and scaled down the jagged hillside using my left hand to grip the sturdiest looking rocks.  I stepped carefully on slippery black rocks and in between black boulders bigger than me.  I saw hundreds of urchins stuck to the rocks just beneath the water.  I realized why the spot was called Boiler’s, as there was a big exposed boil from a sunken ship the wave broke next to.  I made it to the biggest boulder that blocked the view of the waves, studied the other surfers, and then mimicked their actions.

Just after a big splash exploded on the boulder from a crashing wave, I tossed my board in the water and jumped on top of it.  I felt my fins hit a rock as I landed on my board, but paddled to the outside first and then inspected it.  My board was unscathed, and before long I paddled into an overhead wave that walled up and peeled.  An intense adrenaline rush followed and pulled me back into the line-up, alert and ready for more.  When the emerald sets rolled in they allowed me to fly free; to dance up and down the face of the wave. 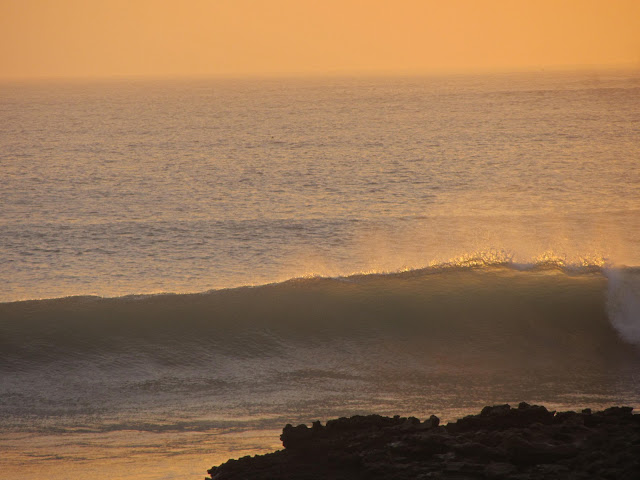 This is why I left flat, beach break Florida.  A welcome session complete with offshore winds and six foot waves breaking in picture-book perfection was any surfer’s dream come true, and I was lucky enough to live it.  After a few hours and many waves, the chill of cold water crippled my paddling skills.  I followed a local with dreads out of the water.  I felt victorious to exit without getting slammed into any of the dark, serrated rocks as big as people. 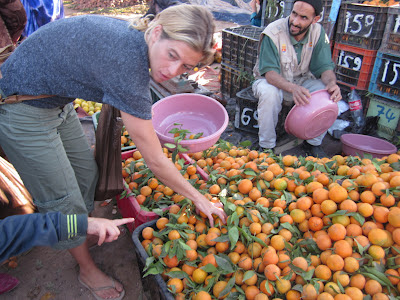 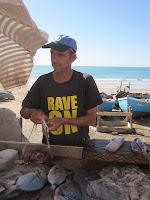 My first Moroccan surf was followed by my first tagine dinner.  The tagine consists of two pieces, a terra cotta cone with a separate base.  Being drawn to local customs, Sophie already owned two and knew how to cook in them.  When we went to the local market, the souk, I got lost in the rich colors and aromas that created a maze of mandarins, cilantro, olives, mint leaves, towers of carrots, tomatoes, onions, and much more.  I trailed behind Sophie as she negotiated using French words and numbers.  She knew the merchant with the best eggs, who tied them up nicely making them easy to carry, and the one who gave cherry tomatoes when we bought lettuce and green beans. 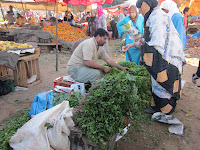 Sophie strategically stacked the food in the tagine; meats and potatoes on the bottom, as they took more heat to cook, while food that required less time and heat, like tomatoes, sat on the top.  We made marinades to steam the food in; a curry juice and a coconut Thai.  My favorite was a sweet tagine with a honey marinade filled with dates, prunes, and figs.  I loved the communal way we ate from the same tagine using fresh bread to scoop up the cuisine.  We dined on our back porch serenaded by the lapping waves of the sea below us and a ceiling of shimmering stars above. 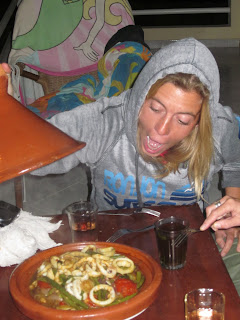 The next night on a similar rooftop porch I met a Canadian yoga instructor at a farewell party.  She fell in love with Morocco and a Moroccan, and shared a popular saying that she had tattooed on her leg.

“Inshallah means accepting that God sometimes works in mysterious ways; sort of an acknowledgment that He is in control of our plans.  It is like saying, ‘God willing’ when you make plans to do something.”

I agreed with the idea and liked the word.  Inshallah is a prevalent idea in the Bible.  Isaiah 41 is one example, “Who makes things happen?  Who controls human events?  I do!  I am the Lord.  I was there at the beginning, and I will be there at the end.”  Proverbs 16:1 is another example, “Mortals make elaborate plans, but God has the last word.”
While traveling and surfing almost everything was out of my control.  Planning a day or weeks movements brought comfort as it gave the illusion I was in control.  Inshallah reminded me of who was really in control, and I knew the one in control had my best interest at heart.  The simple phrase brought peace. 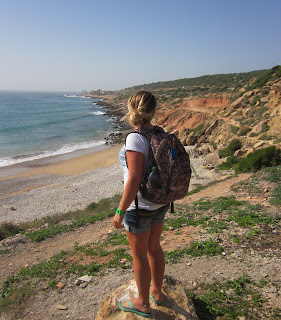 Earlier Sophie and I were plotting a road trip to surf in some lesser known spots and to see more of the country.  We even planned to sleep in a cave one night.  I already saw us snuggled around a fire and being woken up by the first light of dawn, slipping on our wetsuits and being the first in the water.  Inshallah.
Email ThisBlogThis!Share to TwitterShare to FacebookShare to Pinterest
Newer Post Older Post Home