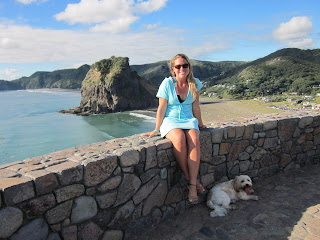 When the guys asked me if I was down to surf Mussell Rock they called it a mish (mission).  The mish to Mussell Rock required a 20 minute paddle across a channel followed by a 30 minute hike down the beach.  The break was sheltered from the wind, and the boys claimed to always surf it alone. We loaded into two cars and parked at a boat ramp.  After the hour journey that involved a long paddle and walk, aside from a herd of cattle, we found the spot totally secluded as promised.

I sat in the glassy Tasman sea watching the sun gradually disappear creating a dreamy, metallic glow across the face of the water. When sets pulsed through, there were more than enough waves for the four local rippers and I to share. The waves broke in shallow water as wedgey, walled-up, A-frames.  No one expected the conditions to be so flawless.  The energy from the pristine surf transferred to our spirits as we flew on wave after wave and hooted and hollered for one another’s heroic late drops and strong turns that threw spray over the back of the wave.  Near the end of the session, after a fast left, my leash snapped and broke when I paddled against a massive set.  Even though I was sad to retire my blue leash, I still felt like the luckiest girl alive. 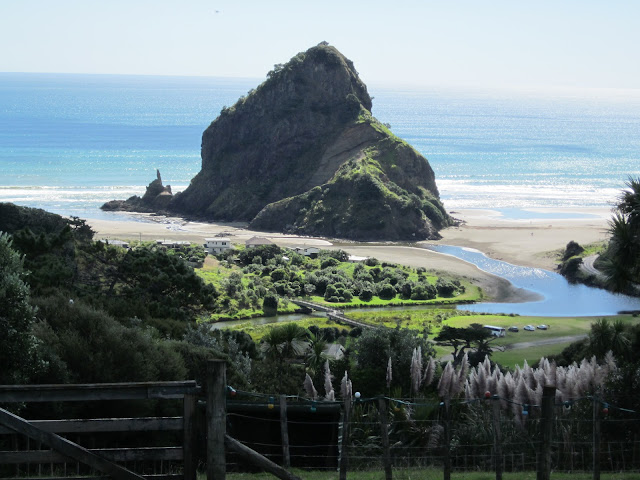 The priceless knowledge local surfers shared drastically altered my surf trip from good to unforgettable.  Kiwis, people from New Zealand, have a reputation for being some of the friendliest people on the planet, and I discovered that to be a fact.  I traveled to New Zealand by myself with confidence; it was simple to get around and safe.  However, I prepared months in advance by praying that God would place the right people in my path.  Even though I arrived alone, by the time I left I realized I did not spend one day surfing without a friend. 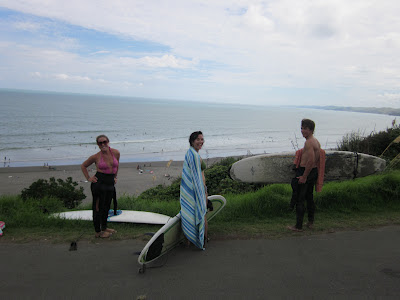 My first days in NZ were spent in Auckland, visiting Rachael, a girl that I met when I lived in Nicaragua.  Her accent, chilled out attitude, and the way she spoke about the beauty and surf in New Zealand worked on me like a commercial. Rachael taught me some slang, like the term “sweetas.”  People used this when they really liked anything, it was “sweetas,” pronounced “sweet_az.”  Rach also hooked me up with her surf hungry friend, Stacey. Stacey and I surfed at Piha beach my first day in NZ, and then she took me to a lesser known beach called Tawharanui. The view from the headland revealed waves breaking along three beaches next to each other. We surfed all three, and I scored a few fast, head high barrels. 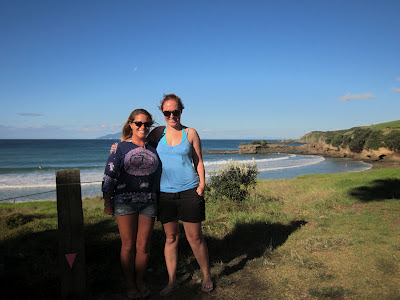 At the third spot, as the sun descended, it spilled a pink hue over the green, hilly horizon and the volcano in the distance. A guy in the lineup said, "That’s my valentine," and stared at the intense colors. I forgot it was Valentine's Day. Suddenly, a peeling wave came straight toward us.  I wanted to paddle for it, but he was closer to the peak. "Go for it," he said. I dropped in and rode it all the way to the beach.  That wave was my Valentine.  As we struggled to pull off our wetsuit tops in the parking lot, the guy walked by. "Thanks for the wave," I said. He stopped and chatted about the surf and checked out my board. When I told him I was heading to Rags, (Raglan) he said he had a house there, and offered to drive me and even let me stay at his place.  Once he was gone, I told Stacey there was no way I would go away with a stranger; I didn't want to be that girl on the news who disappeared while traveling. I asked her if it was creepy that some guy I barely knew invited me to stay with him, and she looked at me like I was the crazy one.  It was a very Kiwi thing to do. 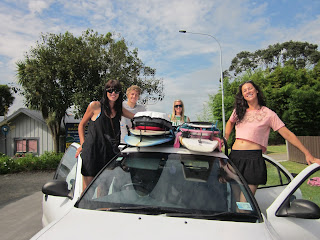 After a week in Raglan, I went on a road trip to Taranaki, a southern region of the north island. Taranaki offered numerous consistent surf spots that faced different directions, giving us an option for every wind or swell condition.  We camped on the beach with a beach break and point break in front of our tent and a waterfall behind it. We surfed remote spots I would have never found alone. 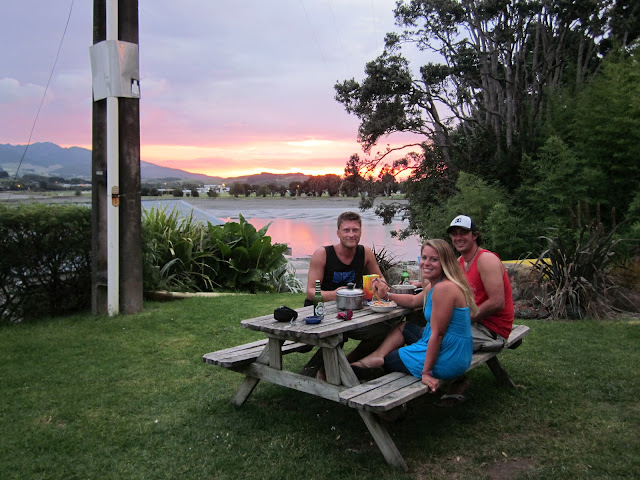 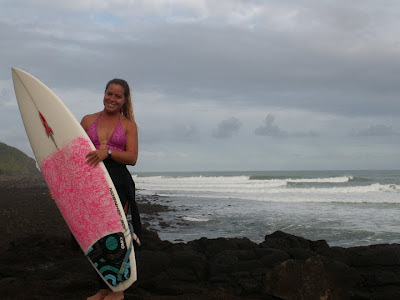 Kumera Patch, a reeling left point, required a 45 minute hike.  We maneuvered through cow patties and pastures that were divided by electric fences before trekking down a black sand beach.  Juggling my surfboard and wetsuit, I considered myself lucky to have only gotten shocked a few times each way.  When I surfed at some new breaks in Taranaki, locals chatted to me and gave me helpful tips about where to sit so I could catch more waves. In a world where surfing has grown competitive and common for locals to be territorial, I couldn't believe they were actually showing me where to line up! 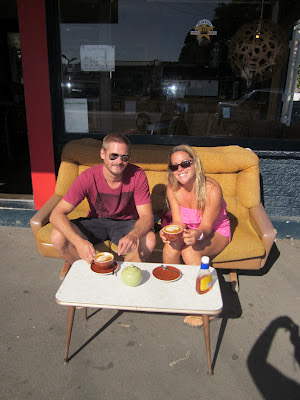 My last surf in NZ, I surfed with the guys whom I surfed with at Mussell Rock. They led me across giant black boulders we jumped off into the ocean, next to the peak. Long lefts broke in point break perfection, and again we caught our share of rides.  I wasn’t a tourist as we joked and bantered in between sets; it was like we'd known each other our whole lives.  I had friends to say goodbye to. 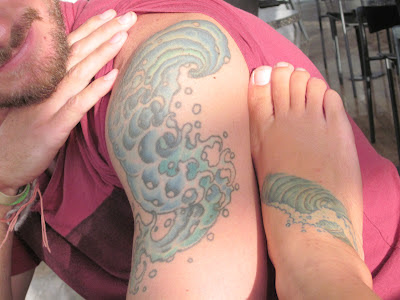 A friend I met traveling shared a quote, "I have friends I hardly know, but the moments we shared I'll never forget." Hiking down the deserted beach at dusk after the session at Mussell Rock, laughing with Stacey about sweetas Valentines gifts, and doing the limbo with electric fences made up a few unforgettable moments.

Ephesians 3:20, “God can do anything, you know, far more than you could ever imagine or guess or request in your wildest dreams!”  God answered my prayers far beyond my expectations and surrounded me with incredible people and extravagant local love. 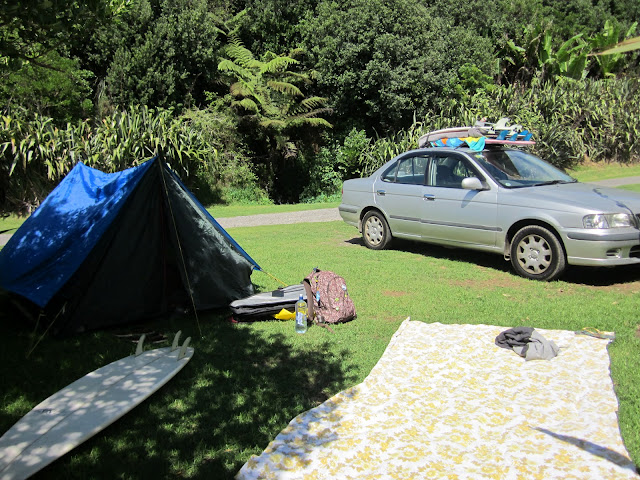