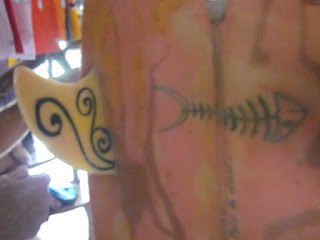 From the back of a truck bed, fat Nicaraguan men auctioned off produce through giant loud-speakers.  The assorted fruits and vegetables they advertised culminated into a song, and I smiled because it was familiar song, one that I hadn’t heard in two years.  It was nostalgic, just like the smell of burning trash.


The burning trash and strong scent of resin mingled on their descent through the air in Cristobal’s workshop.  A fog of fiberglass dust swirled around him as he restored old, broken boards into beautiful and functional.  I just arrived to Popoyo from another part of the country, and we were gathered in the workshop discussing our evening surf session.


“Take the fat twin fin,” Maite advised and pointed into her shop. 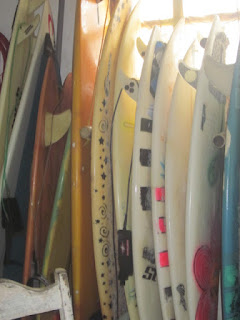 The session signified by the retro fish took me by surprise.  The waves were intense, so I pictured similar heavy surf, the kind each heart beat was felt, and deep breathes, a tight grip, and prayer were necessities for each duck dive.  The 5 foot 15 second period swell with onshore winds translated into strong currents and sectioning, closing bombs, but I trusted Maite enough not to question her.


I pulled the board out from its’ resting place neatly stacked against the wall with at least 20 others like one pulls a book off a library shelf.  The boards full beauty was revealed like a glossy book cover compared to its skinny binder buried among thousands.


The fresh world I would explore with this liberated 5’4 had me frothing.  I was a bird in a cage yearning to fly, and the board was my wings.  I loved how every board has its’ own personality, and discovering the unique sensation of each board as I flew up and down the face of the wave.   Each session and each wave was never the same making the adventure addicting and injecting me with an urgency for the sea, for movement.  I took a leap of faith and tucked the board under my arm, excited to fly; to experience its’ world. 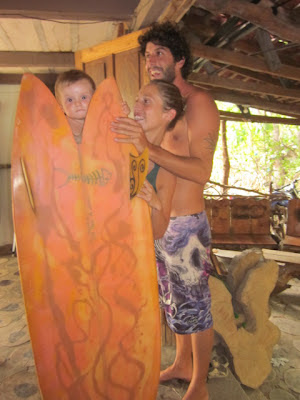 Maite said the river-mouth would be fun because of the onshore wind and large swell.   As I waxed the board, girls started to arrive at the shop.  Tomoe, a Japanese woman, kept count of each day that she surfed and was on session 19.  Macarena, an Argentinian woman was visiting with her husband and baby from Costa Rica.  This was her first surf after having her baby.  There were other women already out; one from Panama, another from Uruguay, and one from the British Virgin Islands.  Although Maite lives in Nicaragua and runs Popoyo Ding Repair with her French boyfriend Cristobal, she is from Mexico.


We walked to the river-mouth relaxed and excited.  The right rolled along, and I flew among the other mermaids from all different seas of the world.  We surfed, encouraged each other, and laughed together.  We shared party waves, and then Candi and Valentina showed up.  I saw them last two years ago.  When I lived there, I took them and other local kids to a beach break and pushed them into whitewater.  Now the girls were 6 and 8, and they paddled into their own waves and even duck-dived their short-boards.  Their dad, a big wave surfer from Argentina, even had the youngest, Maxima, 3, on a longboard tandem surfing. 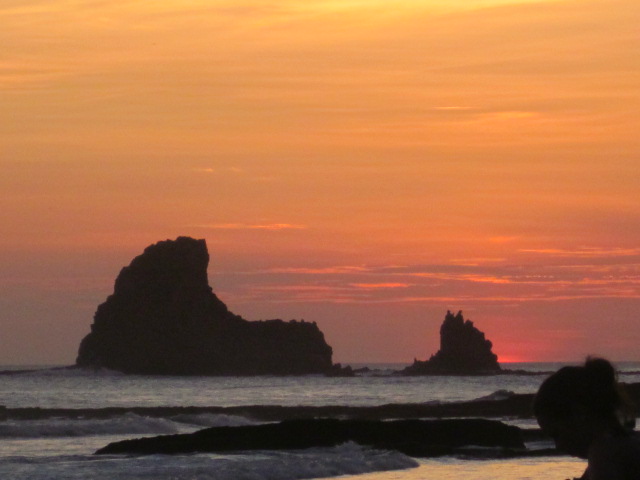 Inspiration overwhelmed my soggy bones as I watched the girls surf and the Lord paint the horizon.  He used varying shades and tones of pastel charcoals, salmon, pink, and amber.  He deepened the hue and blended the colors in an ever-glowing, changing, flowing scene.  I got lost in the light and warmth; like a long embrace that I wished to stay in forever.  The Bible describes heaven in Revelation 21:23, “And the city has no need of sun or moon, for the glory of God illuminates the city, and the Lamb is its light.”  Deep within my soul I knew I was lucky to catch a glimpse of His glory here on earth through the sunset, the girl’s smiles, and the waves. 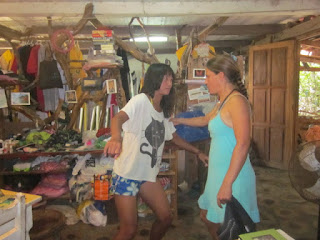 I realized that I would rather surf soft, slop with mermaid smiles and laughter than surf fast, big waves with 30 agro, competitive men.


“I cry.  I sat on the beach, and I cry, Maite,” Tomoe said in broken English a few days later.  Her words triggered anger, and I wanted to take revenge on anyone who hurt my new friend.  But after further interrogation, we found out that Tomoe had cried tears of joy.  She was crying because she rode her first wave that was not white-water. 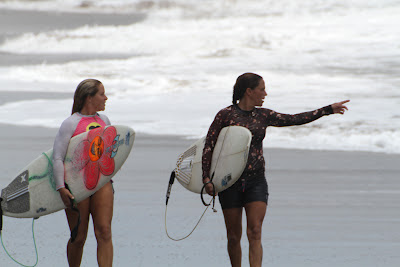 The river behind the surf shop was alive; flowing like sangre, blood, through the veins bringing life.  Orange and purple crabs side-stepped up the mangrove roots as the river ran, flowing gently to the river-mouth leading into the sea.  Time passed; people came and went, hostels and restaurants opened and closed, but the stoke remained; sunset sessions were still magic, and so was the smell of burning paper and plastic.
Email ThisBlogThis!Share to TwitterShare to FacebookShare to Pinterest
Newer Post Older Post Home