Twenty miles up the rugged highway the waves were two or three feet bigger than what we witnessed in Malibu.
In ten minutes I had my wetsuit on and four fins screwed into place, amped for my first surf session in California. I didn’t even wait for Paul or Steve to paddle out into the frigid liquid.
In five minutes I’d already owned three right point break waves, three of the most seamless, feathering faces of water I’d met. Next, I got my first taste of an agro Cali surfer.

“So, I like almost ran into you. My board was almost where your body was,” shouted a thirty-something long boarder.
I paddled by filled with adrenaline from the third fast right. His comment plucked me from that moment as I realized that he was probably trying to intimidate me. Me, a five-foot-one girl. I knew I hadn’t cut him off, because I was already riding the wave when he dropped in behind me. I looked left and right before I dropped in, and no one else was on the wave. I had to say something, I had to defend myself.
“It’s cool. No worries,” was the best I came up with.

I had only been in the water ten minutes. The waves were peeling perfectly down the line, and were so simple to catch, that it was impossible for me to hold back.
Not five minutes later, thirty-something long boarder’s friend, another long boarder, paddled over to me and said, “So I hear you got some bad press.”
I reacted much quicker this time and shouted, “I guess,” and paddled towards the peak. I didn’t know what else to say, because I had nothing to apologize for. I had been surfing long enough to know the rules of etiquette- the person closest to the peak always had priority. I was getting a taste of localism, and I didn’t want them to think they scared me off. I had paddled to the best peak, and it was crowded, but I was going for waves that other people weren’t catching. I stuck around for a while to prove their tactics weren’t working. When I saw Paul and Steve catch some waves in another spot, I paddled over to them, and we surfed together. Even though the wave there didn’t break as fast as where the other peak was, the peaceful vibe transformed the session back into pure, silky bliss. 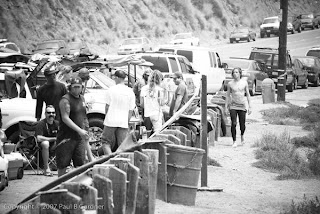 Surfing with them was how it should be; fun and free; nirvana compared to surfing with the agro long boarders. I reasoned that people who behaved that way probably didn’t travel much. While I believed that surfer’s should be respectful of other surfers, I also believed that the ocean belonged to no one and welcomed everyone.
We ate lunch across the Pacific Coast Highway 1 at Neptune’s Net, a restaurant with architecture that made it look like it was straight from 1955. Nothing else existed for miles except rolling mountains, the limitless ocean, parked and moving cars, rambling motorcycles, and a black-top highway. From the restaurant I could see down into the ocean and spy the waves. The port-o-potties across the street were the only things that stuck around long enough to prove that it was not 1955 but 2007.
After lunch Paul snapped shots with his camera of some younger kids that were shredding on the waves. Steve and I sat on a wooden bench overlooking the ocean and watched. People tailgated and milled around the side of the highway like it was a neighborhood backyard barbeque. Some of the people were surfers getting ready to surf, or resting, and others were known as ‘hecklers’ who just hung out and talked about the surfers in the water and the surf, but never actually surfed. The acoustics of the rocky cliff served as an impeccable medium to carry the notes of music from car stereos to the ocean, and the waves lured me to return to the sea for one more session.
The water stung my fingers with its bitter cold kiss, as kelp careened in patches close to shore. I paddled out and rode another peeling right all the way to the kelp bed throwing off spray. Music seemed to emanate from the waves as AC/DC serenaded my second session. I stayed off the main peak and waited a little longer for rides in a less crowded spot. Adrenaline never escaped my veins as I took wave after wave. I wasn’t ready for the wind to pry me from the ocean. Finally, I made my way back to the biggest peak, rode one all the way in and then joined the hecklers.