Surfing for the thrill of it!

I am sitting at a secret break in the middle of Indonesia on the island of Sumbawa, my arms surfed out and my nose dripping saltwater.  I am satisfied with the fatigue from a three hour surf, and I am seconds away from drifting into a siesta with hopes that I will wake up to find the wind still so that I can indulge in a sunset session.  Moments such as this were what I was always searching for, and for the moment I was a predator content with having caught my prey.
Surfing did not fall into my lap, as I grew up in the landlocked Midwest of the United States.   I grew up in Illinois and Indiana, places known for growing corn, basketball, Indy car races, and deer hunting.  The first time my eyes witnessed the wonder of an endless blue horizon, the ocean, I was 12 and my family went to Florida for vacation.  The love affair commenced then, though I didn't learn how to surf until much later, until I was  19 and living in Florida.
Learning to surf threw my life into another realm, and I was consumed by it. Nothing compared to the ecstasy of dropping into a glassy wall of water, my gut shrilling with excitement like thousands of hummingbirds flitting in mad circles inside my stomach.  I craved nothing more than waves.  My obsession was more intense than a bad crush because it didn't just go away one day.  If anything, my love for the art of surfing grew stronger the longer I surfed.  When I graduated from college questions directed at me often encompassed what I was going to do with my degree, and my time came to place my loyalties.  What career would I assume?  The thought of joining the world of Monday through Friday 9-5ers depressed me.  I opted to continue working as a waitress and moved to the beach so that I could surf every day. 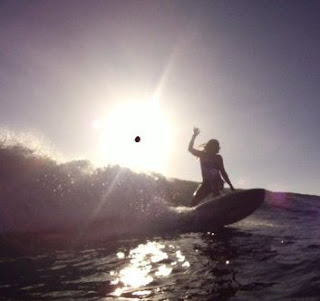 Most people in my life did not understand my affinity with surfing and saw it as a phase, but it has been nearly ten years and my loyalties remain.  My goal was to travel the world in pursuit of waves. In the time in between travels, if there was surf in Florida, I could just get my shifts covered.  Over time I became a surf instructor and also a substitute teacher.  These jobs also enabled me to work as much as I wanted when it was flat, but still offered the flexibility to take off whenever I wanted.  Surfing has always been more than just a hobby, it has been what I base many major life decisions on.
And so my life began, and the cycle of working and traveling was what drove me.  I surfed all up the East Coast of the United States, Hawaii, Costa Rica, Mexico, California, Spain, France, Nicaragua, El Salvador, the Dominican Republic, New Zealand, Australia, Fiji, and Indonesia in the past six years.  I even spent a year and a half living in Nicaragua where I worked at a surf camp.  My next destination, J-Bay in South Africa.  These twists, turns, and detours are my life, and I will never forget the waves I caught, the lessons I learned, or most importantly, the people I met.  I was addicted to the rush of experiencing something different, to see something, taste something, meet someone, think or do something that I have never done before.  This is the essence of life, thrill and discovery, it is what drives me to work long hours and travel thousands of miles, and the journey never ends, because one always leads to another.  Drop into my world of soul surfing solely for the thrill of it.
Email ThisBlogThis!Share to TwitterShare to FacebookShare to Pinterest
Newer Post Home