Irene: East Coast of US 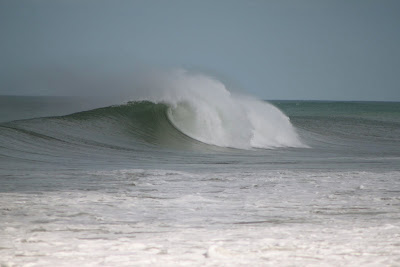 The hype started a week before the waves arrived, just like it usually did.  In Florida, it seems there is more talking than surfing, because most of the time the waves that are craved are not present.   We settle to hang out at the boardwalk, to exchange stories about surf trips, and to daydream about those kinds of waves appearing on our coast.

I tried to not let my hopes get too high, because hurricane swells could be so hit or miss.  They were difficult to predict, and often brought  strong winds that don't make for clean, organized waves.   There are also no channels to help the paddle out.   The swell doesn't usually stick around for long, as opposed to other places, where the swell might build for a few days, and then peak one day, and then drop off for a few more.  The waves are pumping one day and flat the next.  The window of the best surf is just that, a window.  If work or any kind of obligation interferes during the few golden hours,  it is over.  The missed waves will be talked about for weeks, or until the next swell arrives, which could be even longer.   East coast surfers are manic when a swell hits. 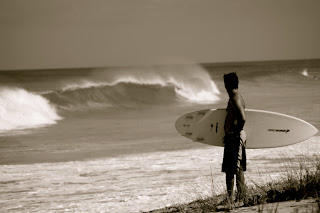 Thursday, August 25th brought massive surf to Cocoa beach, but also with it strong onshore winds.  The shore pound was six feet, and the waves on the outside closed out at twice that size.  Conditions were nasty, but the storm was supposed to pass that evening resulting in offshore winds the next day.

On Friday morning, when I checked the surf I was greeted by lined-up, easily overhead waves.  I surfed for five hours that day, leaving the ocean only once to chug some water.  Even though the sea lice attacked causing my entire body to itch, and the offshore spray stung my eyes, nothing compared to the fast drop and jacked up walls given by Irene, and somehow made these annoyances bearable. 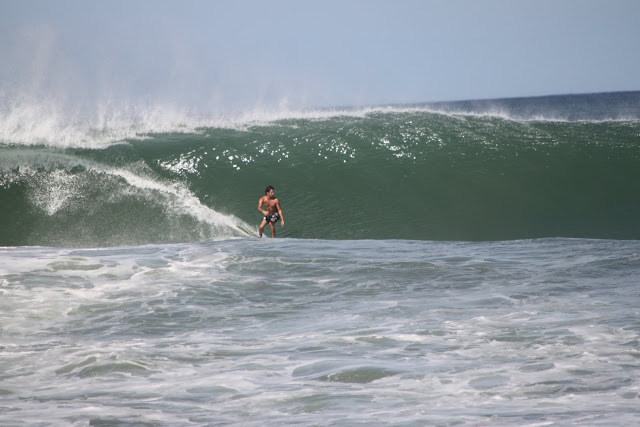 I woke up early the next morning and went across the street with fresh, hazelnut coffee in hand.   There were already two other third street south locals assessing the conditions, and the boardwalk banter began.  Tom, a surfer in his seventies, was debating whether to surf now or wait for the higher tide.  “I only got so much in me before my joints start botherin’ me again, and then I am out for another two months.”

“That’s a bummer, man… sorry about the joints.  I love surfing with you, you’re style is so old school.”

“I got no choice!” chuckled Tom.

Jack, another surfer in his sixties, was on the phone with a buddy who was checking Spanish House, a break that was known to get hollow given the right swell.  He reckoned that it might be good down there, or even up north at another break, Playalinda.  I waited to hear his report of what it was like down south.

“Bo says the swell is dieing down there, thinking the call is to head north,” Jack said after his phone conversation ended.

I looked at the clean, offshore head high surf in my front yard, and decided to stay put.  A friend drove over from the west coast to surf, and we indulged in a four hour surf-a-thon.

By Sunday, the swell waned in Cocoa Beach, but it raged on up the east coast.  The joy Irene brought overshadowed the havoc and destruction she left in her wake after her brush with Cape Hatteras.  The storm built like unvented anger until it exploded there.

Not even a year ago, I was crossing the Avalon bridge to visit my friend in Hatteras.  The mellow vibe and cool chill of the Atlantic had a magnetizing power over me.  I returned each summer to spend a week or longer in the Outer Banks for the past ten years.  There was usually more power packed into the surf there, and I loved to stay in the doll house homes that sat on stilts and had huge wrap around porches filled with rocking chairs.  The perfect waves from Irene were bittersweet, because when I think about how badly she imposed and caused  people to lose their homes, electricity, and their roads destroyed, I wish she never came. 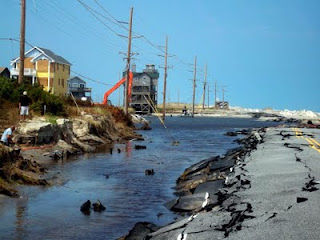 Dawn Gray Moraga is a surf sister of mine who lives part time in Nicaragua and part time in Hatteras.  She has lost her job due to the destruction of Irene, and being resilient as she is, is trying to earn money through her gift of painting.  She is doing original paintings for $100 each.  Her website is www.reddawndesigns.com, and you can email her at reddawn1982@yahoo.com.

Chaos ensues now more than ever before; tornadoes swept across the heartland earlier this year, earthquakes interrupted life in unlikely places, raging fires singed Texas and California, and now hurricanes.  This begs me to question if it is just the norm, or if it is more significant, like the labor pains that are promised? 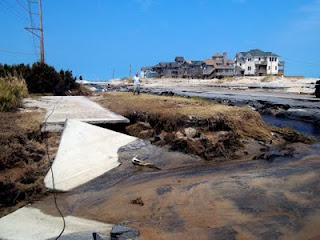 Epic surf photography was provided by
Cash W. Lambert, freelance writer/photographer with Eastern Surf Magazine and Refraction Magazine.  He can be contacted at cashwlambert@gmail.com