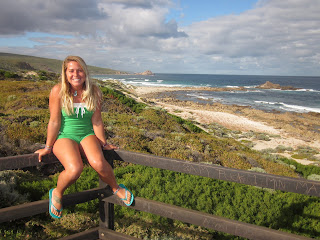 There was an added element of adventure as we tore off a paved road lined with eucalyptus and other gum trees onto a bumpy, dirt road.  Clouds of red dust trailed behind us as we sped to Windmills, the first surf spot on our checklist.   We bounced over countless holes and bumps in the ground, as I kept a tight grip on our boards so they made minimal racket.  The Birds of Tokyo, my new favorite Australian rock band, blared from the speakers creating the sound track to my days with the boys in WA, as the Aussies called it: Western Australia.

It was refreshing to see Paul and Jimmy, friends from back home.  We went to high school together in Florida, and when Jimmy told me they were getting work visas for Australia, I promised I would see them there.   The world was made small by the sport we loved, and for a week I was one of the boys; on a mission to surf our brains out.

There was nothing man-made as far as the eye could see besides a wooden boardwalk.  Just a glistening, eternal emerald sea juxtaposed by an incredible desert hillside, complete with large grey boulders and green bushes.  We hiked down through some brush and rugged, rocky cliffs  to a little cove.  The sand was golden and sucked my feet into it.  The small cove was picturesque and deserted, but unfortunately the waves were blown out and closed out.

The search continued to other reefs, as Jimmy and Paul discussed the aspects of this swell and directions the beaches faced.  We stopped at Yallingup, a spot that boasted another breathtaking view that I was beginning to realize was the norm here.   It was my first day in WA, after spending a month up and down the east coast,  and the drastically different terrain overwhelmed me.  I was charmed by the tropical vibe and crystal clear water of the east coast.  I adored the incredible, long right points from Noosa all the way down to Manly beach near Sydney.  But the east coast was as opposite as it could be from WA.  The majority of the coastline there was filled with populated towns and cities; high rises and crowds of surfers that ripped, while WA had a desolate and rustic feel to it. 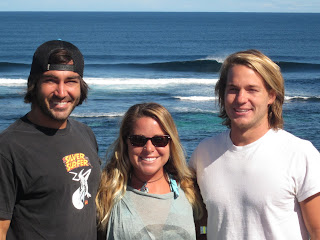 Finally, the boys decided to check a reef known as Smith's.  We grabbed our boards, walked down the beach to the reef and paddled out there.  The surf looked smaller from the beach and the water was fresh -- chilly enough to wear a top or wetsuit.  As I paddled I felt the waves thumping hard and fast; easily a foot or two overhead.  The paddle out was intense and I felt relieved when I got to the outside.  As I looked around for Paul I noticed some other people in the line-up who looked familiar.  I had that strange feeling of when you know someone, but aren’t  sure how you know them.  My mind raced with different possibilities and scenarios.

Then it hit me- I knew these people from surf magazines and videos!  I was surfing with Glabe King, Damien Hobgood, Yadin Nichols, Rebecca Woods, Melanie Bartels, Silvanna Lima, and some other lesser-known surfers on the circuit.   I was proud to catch a few waves but was humbled by the pros.  Mostly I just sat in the water stunned by their spray, speed, and airs.  The wind was onshore and the conditions were far from perfect, but they made the waves look epic.  At one point Rebecca Woods sprayed Paul when she did a power turn right by us.  He didn't stop smiling after that and chatted with them.  They were friendly and told us the next day they were leaving Dunsborough to go to Bells beach for the next contest.  They shredded and shared waves; just normal people with paranormal ability.

The next day we surfed a spot called Lefthanders.  It took 45 minutes to drive there and then a 20 minute walk down the beach to get to the break.  Again we were deep in nature as there was no sign of civilization for miles.  I sensed that this was not a good place to get hurt.  The shoreline was menacingly beautiful, adorned with sharp rocks and thick, black kelp.  The water was eerily clear.  I saw the reef followed by total black, providing proof that the ocean was very deep before the reef.  We surfed there for three and a half hours.  I was impressed by the level of surfing from the guys.  They encouraged me to drop into the waves as deep as possible, and we scored countless fast and heavy lefts, even coming away with a few barrels. 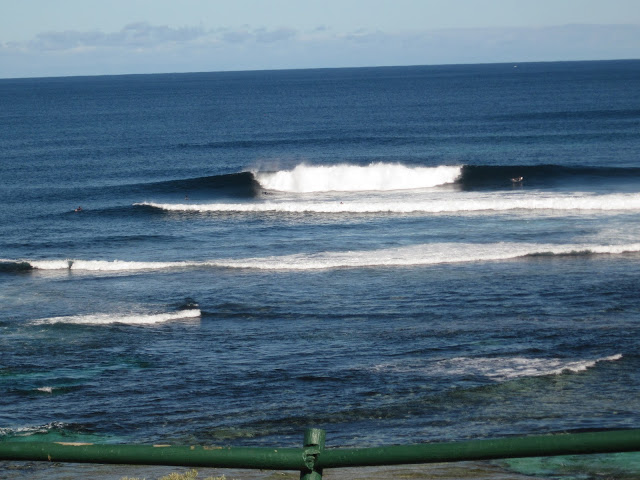 Each day in WA I thought life could not get better yet somehow it did.  The pure, raw, rugged beauty of Margaret River left me awestruck.  We surfed the reef-break called Prevelly and experienced near perfect overhead, A-frame waves for 3 hours.  I got numerous great rights and even a sick air drop.  Afterwards, we relaxed with a picnic overlooking the break as the tide washed in.

On the way back to Dunsborough we drove past an open field where the boys said they often spotted kangaroos.  Sure enough, we pulled to the side of the road and watched hundreds of them leap around using the leverage from their long, powerful tails.  Their heads were awkwardly small  compared to the rest of their bodies.  To witness them in their natural habitat felt like an honor. 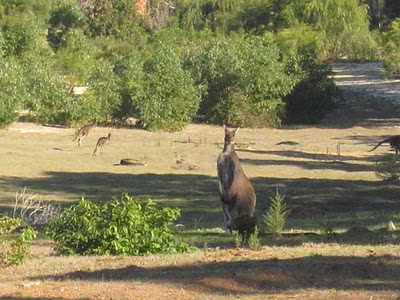 I was in love with this wild west, and I realized no amount of time there would be enough.  I was so sad to leave when I  caught my bus to Perth, that I had no room in my heart for the excitement of going to Bali next. 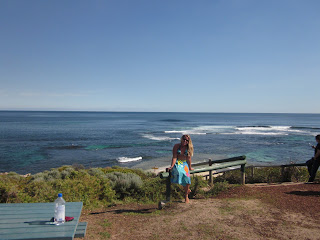 Diversity of life and the beauty on this continent was like an intricate painting -- the kind you continually discover fresh details in the longer you examine it.  Each day I noticed new hues of green that shined in the sea, contours in the coastline, and a brighter amber that glowed through the cotton-like clouds.  All the variations of nature pointed me to God, the master of the masterpiece.  "For since the world was created, people have seen the earth and sky.  Through everything God made, they can clearly see his invisible qualities- his eternal power and divine nature."  I understood with total clarity what Romans 1:20 meant, that all have evidence of God through nature.  God whispered to my soul through His creation.  Life is a gift from Him.  My days and those moments were such an extravagant a gift that left me speechless because thank you could never be enough.
Email ThisBlogThis!Share to TwitterShare to FacebookShare to Pinterest
Newer Post Older Post Home