The last thing Dawn saw before the accident was an angel on a CD cover she hadn’t listened to in a while.  It was the last leg of our journey; driving to Wilmington from Virginia Beach for an art show.  I was searching for a certain CD, and she looked away from the road for a split second to help.  Both of our thoughts were racing a mile a minute, and in my peripheral vision I saw a car dart in front of us.  Dawn slammed on the brakes.  I looked to my left and saw a car coming right at me. 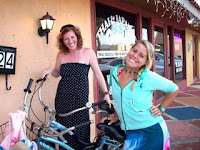 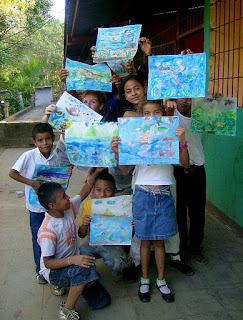 They called her Rojita in Nicaragua, which meant red lady in Spanish.  The name was given for her untamed red and sun bleached blonde curly hair.  Her personality matched her looks; high energy and intensely in the moment.  I noticed a light about her when we met, and others were drawn to her positive aura also.  She had a free spirit, yet remained humble and was the most generous, outwardly focused young woman I met.  God brought her into my life when I needed a good friend the most, and I could have never asked for or imagined a better one.

We lived out of her Four Runner for two weeks as we traveled from Cocoa Beach, Florida up to Virginia Beach.  I sold Dawn’s surf art at coffee shops, surf shops, art galleries, and art festivals all along the way.  We dubbed our trip, “The East Coast Tour.”  The four runner was filled with a cooler of food, canvas original paintings, hundreds of prints, and our suitcases.  Stashed all around were blankets, pillows, towels, flash lights, and of course surfboards.  We surfed in every spot we stopped as long as it was 2 feet or bigger.

Our first stop was New Smyrna Beach where we got right down to business and surfed the inlet next to the jetty.  We showered at a boardwalk and then visited art galleries, surf shops, and coffee shops.  I talked to the owners/managers and persuaded them to buy  some of Dawn’s stuff.

Shop owners often commented on how bad the economy was, and the negative vibe and mindset  bothered me.  My perspective on poverty and bad economies was forever changed when I spent a few months in Nicaragua with Dawn and we visited La Chureca, a village she volunteered in and lived in for two months.  The people literally lived in a trash dump.  A layer of smog from trash constantly burning was a permanent fixture, and as a result the average life span was 30.  Most of the kids did not have shoes and lived in tents made of black plastic trash bags.


An expat from Daytona told us that we could sleep at the lighthouse when we traveled through that area.  He remained in Costa Rica and Nicaragua for at least 20 years, but of course we didn’t take that minor detail into consideration.

We had just rearranged for a few hours of sleep.  I placed the canvas originals in the front two seats, while Dawn drained the cooler and left it outside.  We put our surfboards under the truck so they were ‘out of sight, out of mind.’  Then we found our pillows, blankets, and towels, and finally got into comfortable positions when the violent thumping on the window came.  Then a bright light shone obtrusively into the truck.

“You can’t sleep here,” a police officer growled.  He pointed his flashlight right into my eyes and gave me a disapproving look.

We were forced to reverse all of the above half awake.  Exhausted, Dawn drove around Daytona trying to lose the cop following us.

In St. Augustine, we sold prints and originals at an art show, and visited surf shops and coffee shops for two or three days.  Next we went to Jacksonville Beach where we ran into  a surf buddy of mine after a thumping session at the pier.  We spent the night laughing and catching up, loving how surfing planted friends all over and made the world small.  Then we stopped in Charleston, Myrtle Beach, Wilmington, and Wrightsville Beach.  We chased the sun, and at night we faded fast. 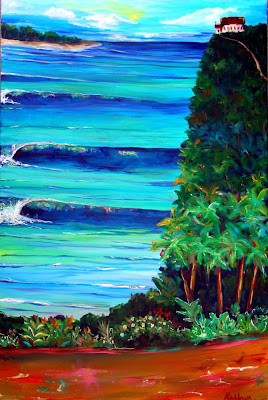 Cape Hatteras felt like home.  I spent many weeks during the late summer and early fall in the Outer Banks.  Dawn lived there before she went to Nicaragua, and had numerous close friends living there.

We found classic chop slop Atlantic surf for most of the trip.  But one day God granted us epic surf at a spot in between Cape Hatteras and the Outer Banks called the Ranger Station.  Dawn thought to check it, and as we walked up the massive sand dune,  clean, offshore barrels were revealed framed by tall sea oats.  The fresh water kept me paddling and going for peak after peak.  We surfed in an oblivious trance all morning until the onshore wind and growing crowd persuaded us to rest.  That session left me satisfied and grateful to God for His perfect provision for us.  The entire trip we made just enough for gas and food through sales of prints.  He also provided the surf we needed to rejuvenate our spirits.

We stayed in the Outer Banks for a week and then went to Virginia Beach.  When I met all of Dawn’s family and friends, I couldn’t understand why she would want to return to Florida.  Most of them were talented surfers or artists of some sort.  They all expressed how much they loved and missed her, and were welcoming and kind to me.

I always loved the quote, ‘If you want to make God laugh, just tell Him your plans.’  Over the course of our trip these words came to life.  “We can make our plans, but the Lord determines our steps.” - Proverbs 16:9

We were moving from one thing to the next too fast.  The accident forced us to slow down and refocus on the one who was really in control.  God protected us in the accident and also the people in the other car.  The truck was wrecked forcing Dawn to stay in Virginia Beach after the tour to work everything out.  Even though I was sad about having to say goodbye to my best friend, I realized it was in God’s plan for Dawn to be close to her friends and family.  God often works through tough situations. No matter what, He is always in control, like a verse in Isaiah states, “Who makes things happen?  Who controls human events?  I do!  I am the Lord.  I was there at the beginning; I will be there at the end.”

I will never forget waking up one morning, the first rays of sun probed my eyelids until I finally opened them, feeling refreshed.  I woke up in a car, forgetting for the first moment of waking life I was on the east coast tour.  As I looked around it all came back to me, and I realized that one of my best nights of sleep was spent in the Wal-Mart parking lot. 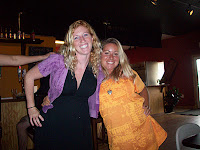