I was studying Spanish in San Sebastian, Spain when a boyfriend back home broke up with me.  My girlfriends claimed the only way to get over him was to meet someone new.  Desperate to ease the hurt, I was willing to try anything.  My only attempt occurred when Joan and I were surfing after class on a cold, overcast afternoon.  I had all of my cold water gear on.  Booties, a full wetsuit, gloves, and my hood.  I didn’t wear the hood when it was sunny, because it wrapped so tight around my head that it made my jaw ache.  With the hood I could surf a half an hour longer, so it was clutch when it got colder.  The waves were small, but we both wanted to get in the water and paddle around.  We paddled farther out than we had ever paddled before.  Then, as I looked back at the beach, I noticed the hippie-looking guy on a long board paddling out.  I met him on the beach a week ago; when I had a boyfriend.  He was one of the only Americans I met the whole time I had been Spain.  He had a reddish-brown beard and a little bit of a belly, but there was something rugged and cute about him.  I told Joan that I thought he was cute, so we decided to paddle over to him.  Joan acted casual and started a conversation.
“The waves aren’t too bad.,” she said.
“Yah, well, I’m just learning, so I couldn’t really tell you the difference.”
“We were just surfing over there by the rocks.” Joan said to keep the conversation rolling.
“Yah, it was pretty fun over there,” I replied.
“You two were pretty far out there,” Beard guy answered.
“So, uh, we are going to study at that bar with wife near Molly Malone’s tonight,” I said.
Silence. 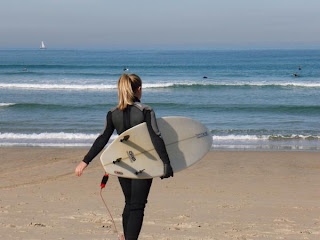 “Where do you study?”  Joan asked.
“My buddy has wifi at his place, so we all just go there.”  He answered with his eyes glued to the horizon.
I spotted a meager wave approaching, and reasoned that if I caught it and made a few turns I might impress him.  I paddled hard and sprang to my feet getting three solid turns before the wave dissipated and I jumped over the back.
“Nice!”  Joan shouted as I paddled back towards them.  I saw another wave heading our way.
“Go, go, you can get that!”  I yelled to hippie-boy.
The mountain man flailed his arms and paddled hard just to fall as soon as he managed to catch the wave.  Joan caught the same wave and rode it all the way to the beach.  As the mountain man paddled back to the line-up I tried to encourage him.
“Hey, way to catch that one!”
“Thanks,” he answered.
“Well, uh, I think I’m gonna head in.”
“See ya,” he answered never taking his eyes off the immense ocean.
As I began to paddle away feeling a bit defeated, something told me to try one last time.

“Hey, we are going to that wifi bar next to Molly Malone’s if you want to meet us there around seven.”  I couldn’t believe I had the guts to be so bold.
“I’m just gonna go my buddie’s place,” he answered, waved, and turned back to scout the surf.  My heart sank; my confidence was blown.  I was shivering, and all I could think about was how stupid I felt.  I wanted to drown myself in a simmering hot shower.
“Girl, it’s his loss!”  Joan answered when I filled her in on my pick-up attempt as we jogged up the beach.
“Don’t forget there are many fish in the sea,” she said as we parted ways and I continued to jog towards my apartment.  When I got there I paused at the bottom of the stairwell and looked critically into the full length mirror.  I started laughing hysterically; no wonder he wasn’t interested!  My face was totally squished together from the hood and my checks bulged out the opening.  I usually just put the hood on when I was at the beach, so I was not aware of how silly I looked in it.  I imagined myself as a sleek and sexy surf diva, when in reality I resembled a bloated alien! 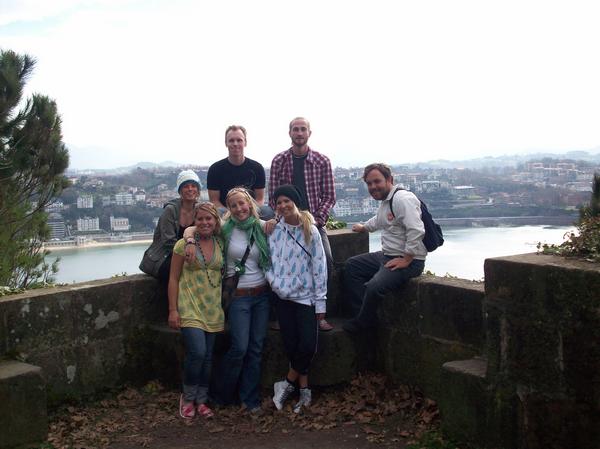