The White at Whitsands:CapeTown,South Africa 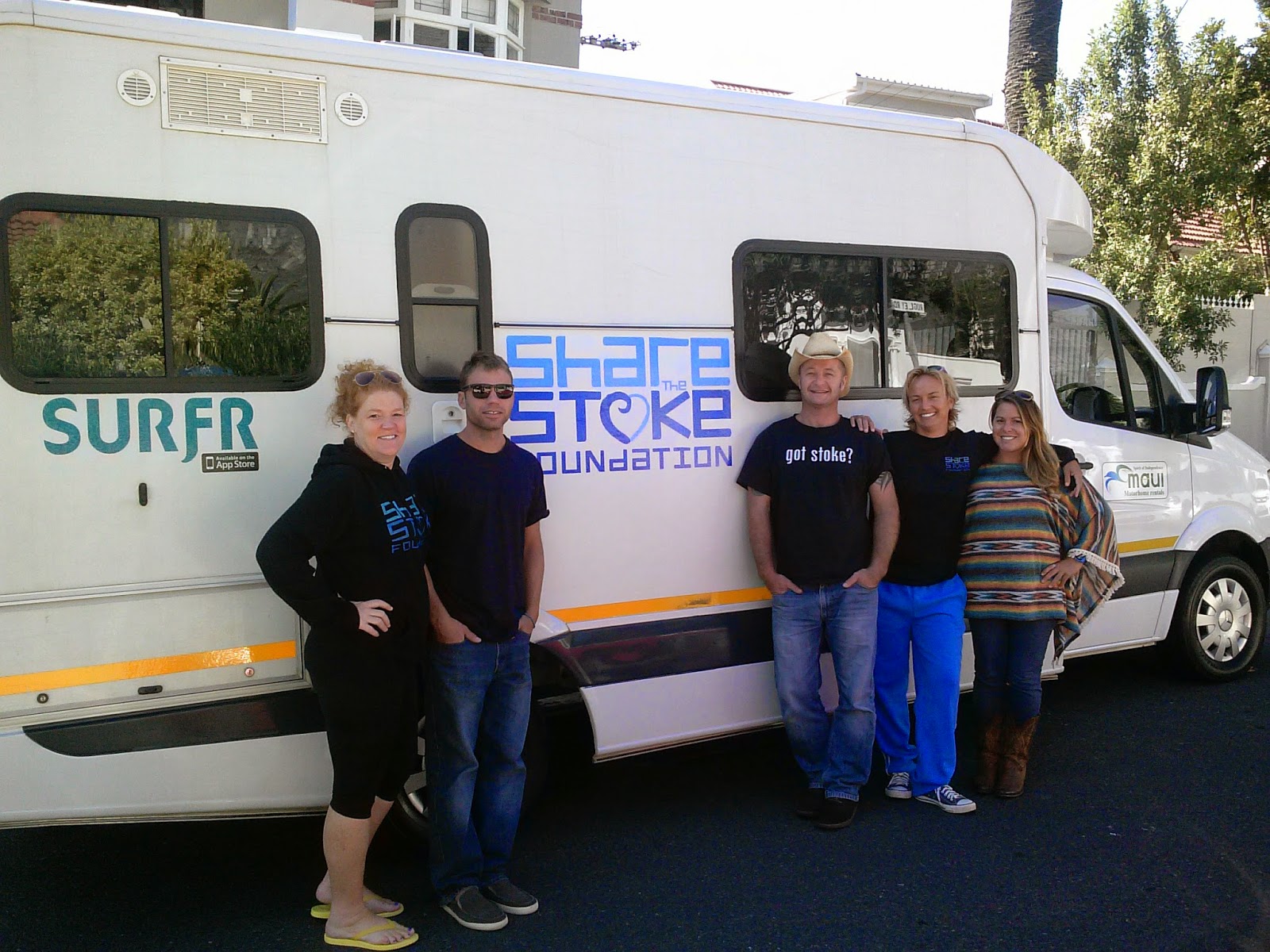 “If you make the Lord your refuge, if you make the Most High your shelter, no evil will conquer you; no plague will come near your home.  For he will order his angels to protect you wherever you go.  They will hold you up with their hands so you won’t even hurt your foot on a stone.”  - Psalm 91:9-12 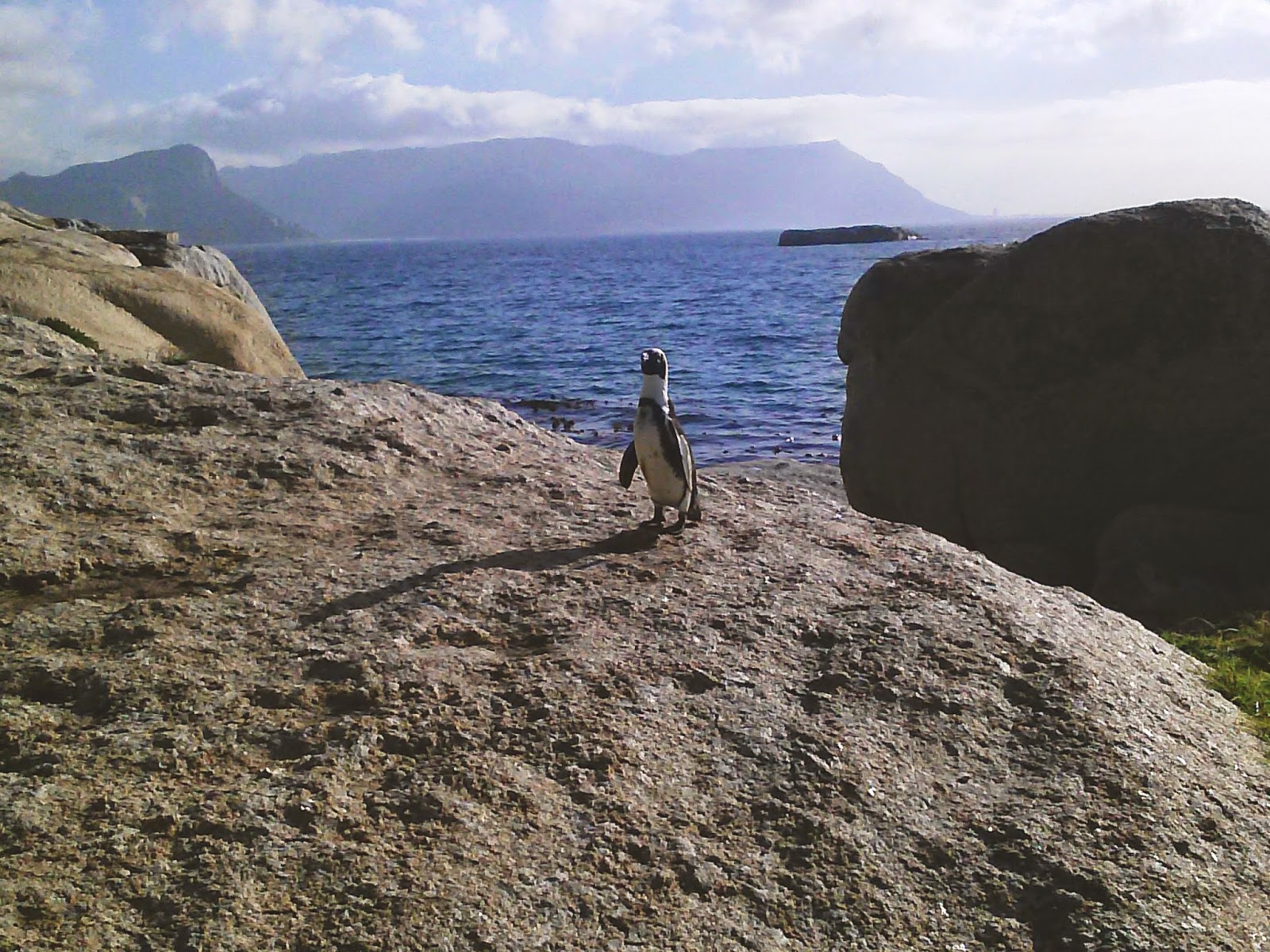 The most terrifying day of my life started out fairly normal.  It was my last day in South Africa and time to peel the stickers off the RV and organize our lives neatly back into our suitcases.  After touring the fishing village of Kulk Bay, visiting penguins at Boulder’s beach, and exploring the Cape of Good Hope, my friends and I searched for waves and found them at Whitsands Beach.  The swell delivered crystal clear wedges offering fast, racey walls, alternating with hollow cylinder waves. 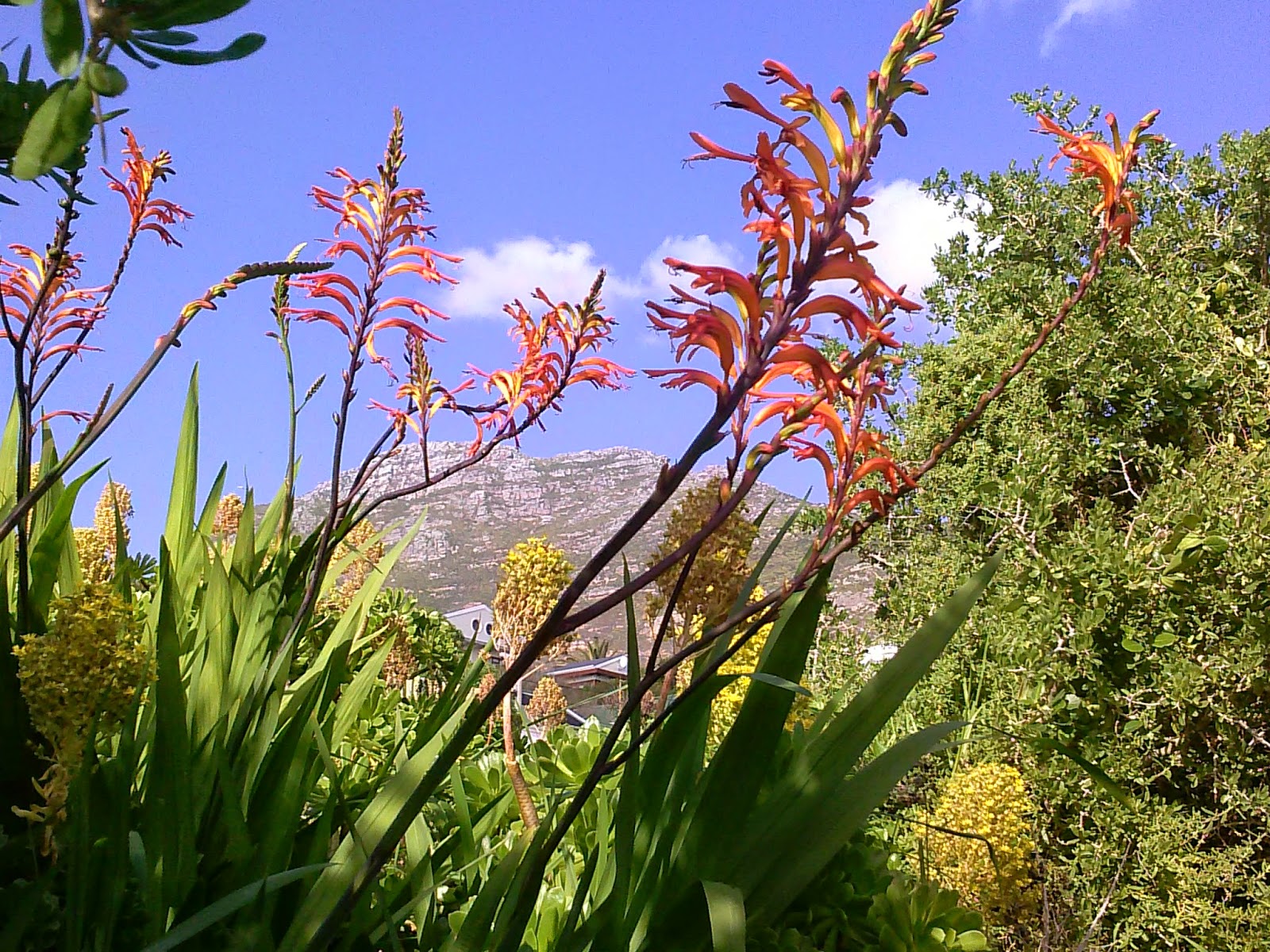 After about an hour, I paddled towards another peak.  I duck dived under whitewater and noticed out of the corner of my eye what looked like a surfer in a black wetsuit duck under the same wave.  It was strange when the surfer never surfaced, and I never saw a board.  I scanned the horizon for a wave and glanced back and saw a huge black shadow under the water a few yards away.  I couldn’t make out what it was, and at first assumed it must be a seal like we’d seen, but it was way too big, way too black, and then I noticed black tips that didn’t belong to any type of seal. 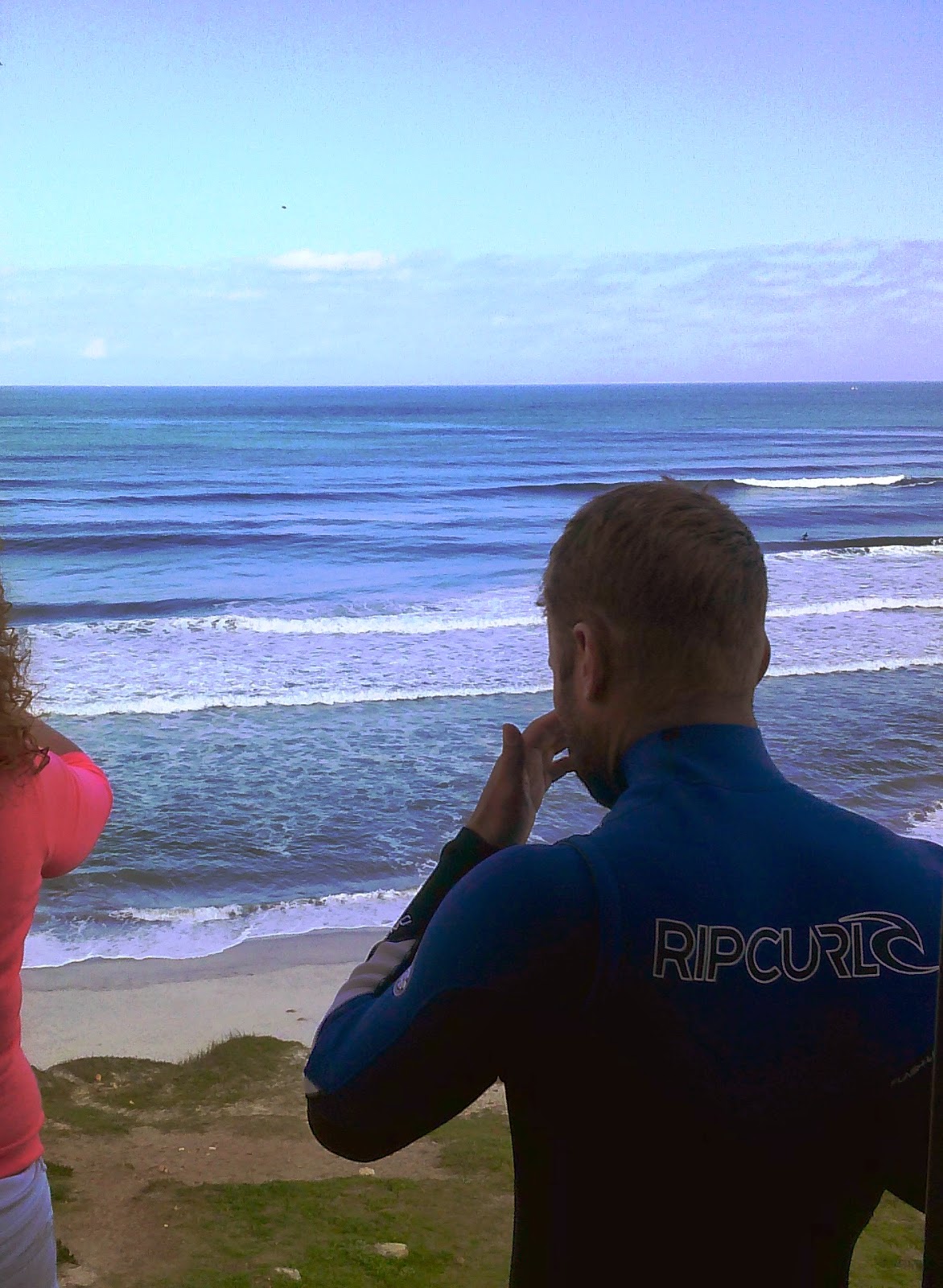 I glanced away to check the horizon again for a wave and then looked back towards the mysterious creature to discover a big black fin surface right next to me.  There was no doubt about what the creature was now, and I pulled my legs and arms onto my board.  The dark fin was so close I could have touched it.  My heart beat wildly, and I went into shock.  Frozen in fear, I couldn’t scream or move a muscle.  I just wanted to curl up and close my eyes in hopes that when I opened them the large shark would be gone.  I shut my eyes for an instant.  When I looked again to my right I saw only water, but then I looked to my left and saw the fin again and realized the shark had circled me.
Rory was the closest surfer to me, and began shouting, “PADDLE MISSY, PADDLE!”  SHARK! SHARK! PADDLE!”

His commands stirred me to action, although I was afraid to put my hands and arms into the water.  I began to paddle.  A few seconds later, I glanced behind me expecting the shark to be gone and saw the black fin following close behind me.  In my most horrified breath, I prayed, “God help me!” 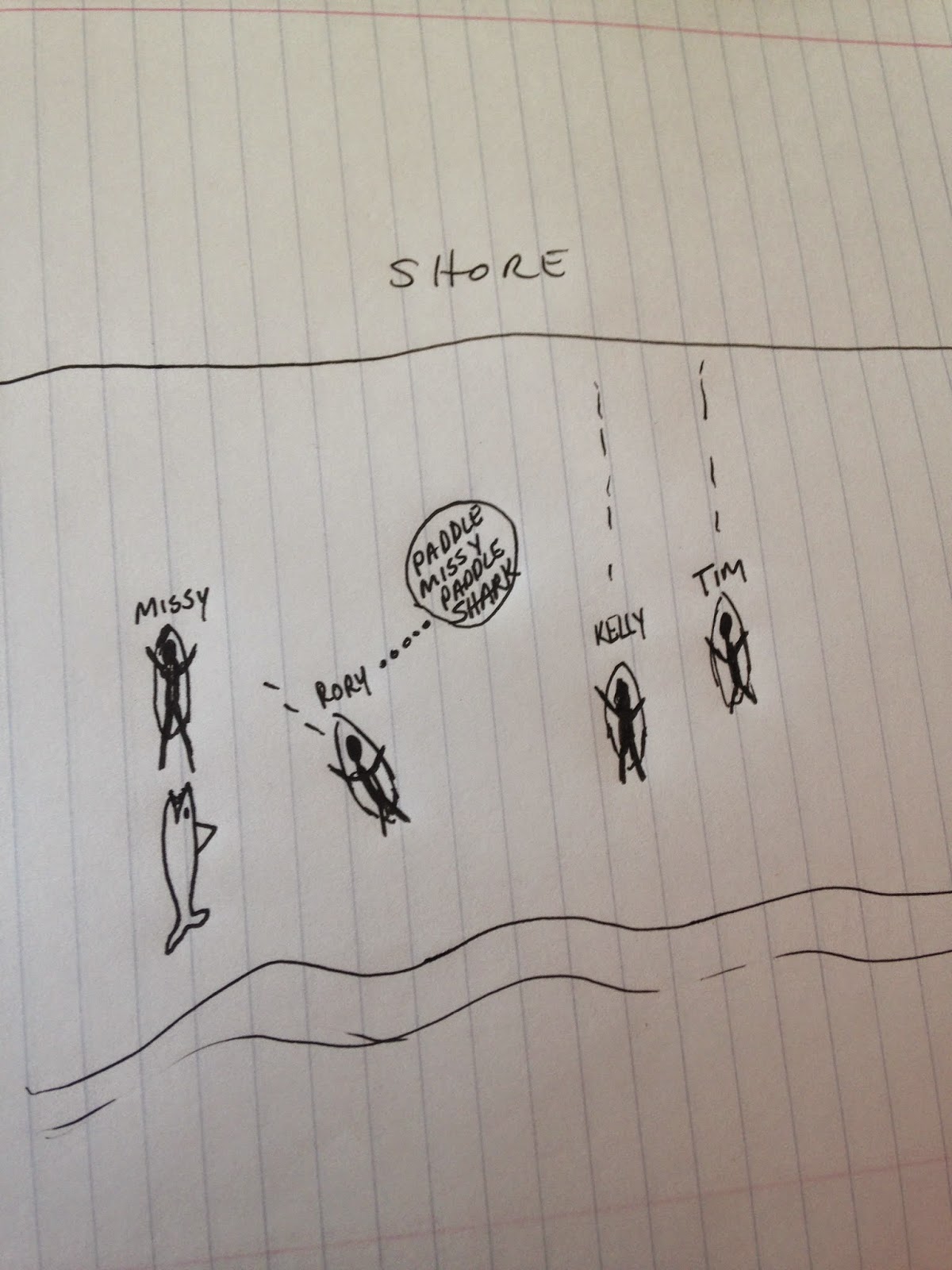 The next moment after I began praying, Rory yelled, “A WAVE MISSY, PADDLE, PADDLE!!!”
When I paddled for waves I always looked back at the wave to gauge the speed to ensure I didn’t outrun the wave or miss it, but this time I couldn’t bring myself to look back.  I simply trusted the wave was coming, and I paddled harder than I had ever paddled and caught the wave.  I stood up and raced down the line as far away from the massive animal as I could get.  All I wanted was to put space between us, and I couldn’t get out of the water fast enough.  The wave died and I fell back down onto my board and continued to paddle for my life.  White water rolled in next to me, and I saw Rory and then Kelly and Tim and the other surfers rushing onto the beach.


We hugged each other once we were all on the sand and the inevitable banter began about everyone’s perspective of the shark.  Rory was the closest to me and had seen both of the fins, and had the horror of watching it follow after me.  He said as soon as I caught the wave the fins disappeared.  Tim and Kelly heard Rory shout “SHARK!” and saw the fins trailing behind me.  They lived a nightmare and felt trapped in the water because as they paddled to get to shore no wave came, and they even had to fight a small rip current.
Rory had surfed for 38 years since he started when he was four, and he said this was the first time he had ever seen a shark while surfing.  There was no doubt it was a great white, and no one considered going back to finish out the session. The rest of the day I felt bursts of joy for being alive, and I felt so grateful to have all my limbs.  I thanked God for answering my three word prayer with a wave that carried me to safety.
A week later a man was attacked while surfing in Muizenburg, a beach in Cape Town, not too far from where I had surfed.  He lost his leg.  I will never know why that man lost his leg and I was left unscathed.  All I can do is give God glory for hearing my prayer and rescuing me. 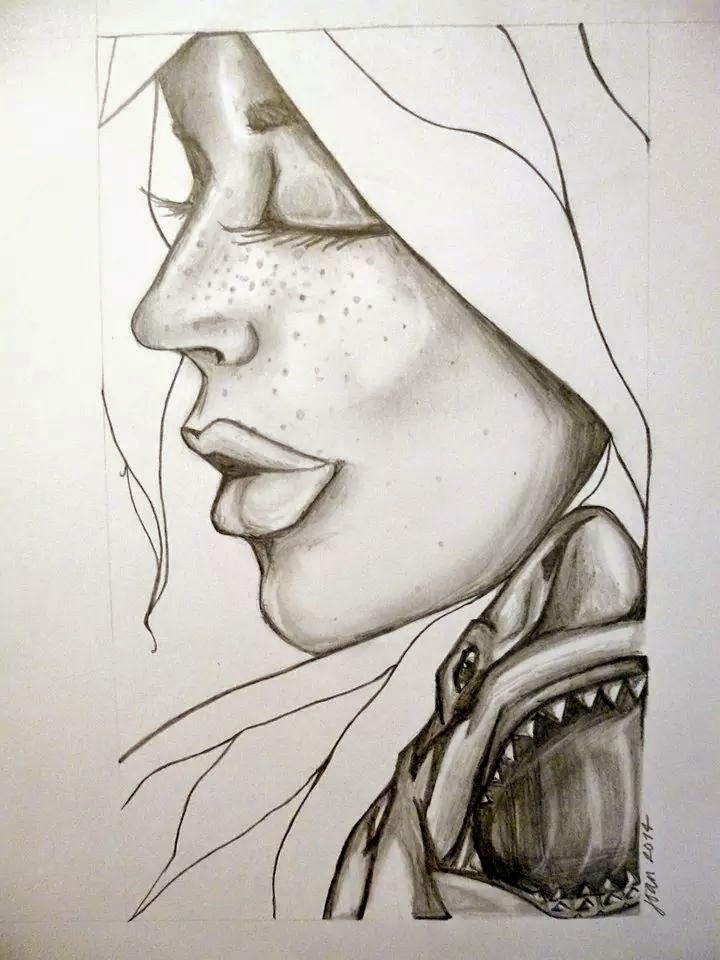