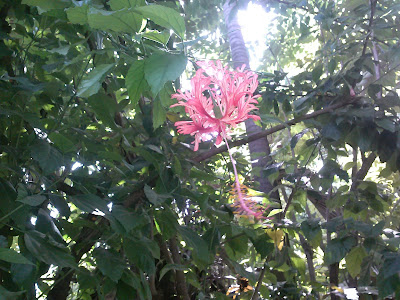 Barefoot, we sidestepped down mossy and muddy limestone framed by ferns and foliage.  Birds spun in the sky, mingling their morning song with the beat of maracas played by insects and solos by goats, pigs, and roosters.  The sun sparkled on the turquoise Caribbean that peeked through breaks in the overlapping green canopy.  We passed towering trees swollen with mangoes, passion fruit, and bananas.  Kelly and I descended down the steep hill to get to the sea, to immerse ourselves into the saltwater for a few waves.  Our last day there, as we fumbled down the hill, I marveled at a land infamous for poverty, and saw a rich land.

I traveled to Haiti with the Share the Stoke Foundation.  We went to donate surfboards and help open the first surf school started and built by an organization called Surf Haiti.  Based on her reputation, I expected to see a desolate land matched by broken people.  After all, Haitians had every right to be following the earthquake in 2010 that measured a 7.0 on the Richter scale and claimed the lives of an estimated 230,000-316,000. 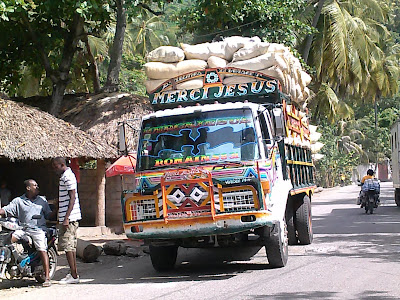 We flew into Port-au-Prince where Joan from Surf Haiti loaded us into a van, and drove us south in the direction of Jacmel.  We wound through streets that resembled a war zone where throngs of people made their way through commonplace destruction.  Wildly painted buses brimming with souls swerved around us and the aqua ocean loomed between villages of black plastic bags and rubble.  We slowed to a stop around one corner behind some traffic, and I spied an old woman balancing a basket brimming with plump papayas on her head, steadily walking along wearing no pants or shoes, her skinny bottom exposed.

Heart broken, I sat behind the glass windows, a removed spectator, peering at the world operating outside of my bubble.  I watched the chaos of the city transform into a hilly, verdant countryside, and then finally into beach villages on the coast.

Once in Kabik, we caught up with some of Haitian kids at the surf club.  They raked the sand around the newly erected building, collected plastic bottles and trash on the surrounding beach, and placed small rocks and gravel around the school.  Alex explained, “We want to take care of the school because it is ours and something we share and love.”  Later on in the ocean, the kids helped each other for hours, the older ones pushing the younger ones into waves.  They rotated boards and celebrated with successful rides and laughed together at the wipe-outs. 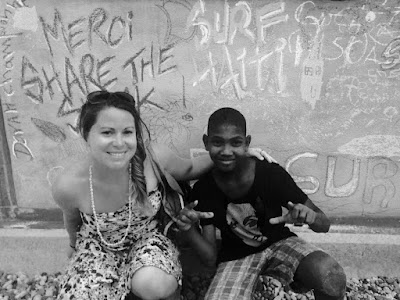 We ran late on the way to the opening ceremony, as we were stopped by a funeral procession.  I can still feel the vibrations of the brass tuba’s song reverberating through the acoustics of the jungle.  A grand marching band wove up through the trees followed by children, women, men, old and young, assorted as they come.  The band made a victorious, celebratory sound, even as their muscles must have burned from climbing upwards.

A verse from Ecclesiastes surfaced above all my other thoughts,“You learn more at a funeral than at a feast- After all, that’s where we’ll end up.  We might discover something from it.”  – Ecclesiastes 7:2 (The Message translation).

In Haiti life and death were tethered tight, dancing an intimate tango.  Where death had a loud presence among the living, there seemed to be a greater appreciation for the gift of life; the gift of each day.  I wondered if the American culture in which I lived was better off distracted from this universal truth.  Was it better to be a present minded people, living in the now, not worrying about tomorrow or planning too much ahead?

I remember the last supper, of simmering garlic and butter lobster and octopus- fresh from the same crystal sea we surfed in.  Joan, our host, sent one of the kids further up the jungle hill to get the rice from neighbors.  Joan explained that if they lacked an egg or flour for their dinner, the family that lived nearby would send someone over to fetch it.  They simply shared what they had, and everyone had what they needed.

Months after those days in Haiti, I remain inspired by her people.  Materially speaking they had nothing, but they held their heads high and smiled; really smiled.  Despite living in the wake of the earthquake in 2010 and poverty, they were some of the most joyful, loving people I had the privilege of meeting. They gave and accepted love easily and were connected to us, each other, and to nature.  I am left wondering who is rich and who is poor?  What happened to me in Haiti is what happens to countless people who go on mission trips; I set out to impact lives and returned home with my own soul affected than I ever imagined possible.  The morning we hiked down to the beach, taking the short cut through the jungle I saw a glimpse of the beauty of Haiti.  And I remember how that session was just as much about the journey as the wave riding.