Baptism, Duck Diving, and the Ripple Effect of Obedience

She was old enough to know the answer that was expected of her.  The preacher of the church where she’d spent every Sunday of her ten-year-old life had explained that she was now at the age of accountability.  Her knuckles were white from squeezing the top of the wooden pew.  Mom and dad stood on either side of her as the rest of the congregation filed out of the pews.  She agreed, yes, she would be obedient and get baptized.  It was time.  Mom, dad, and the preacher bent down to hug her, smiling and rejoicing.  It felt good to please them, to make them so proud.

Submerged under the water, a moment of pure peace passes, and she is back up, breathing in oxygen.  Her hair is now wet and she feels renewed, washed clean of all the grit and stress that came with life.  The sweet fragrance of sunshine and saltwater mingle on the surface of the sea and she savors each breath.  Another wave curls and crashes before her and she is back down, under the cylinder of energy, in that peaceful place. 50 years later, that girl who was baptised is a wife, a mother, a grandmother.  And she hears the same words repeat through her mind, through her heart…. “It is better to please God than man.”  Through the years there has been heartache and joy, and she drew closer and closer to Christ.  She fully understood what it all meant by now, that is wasn't about being perfect or being good enough.  That it wasn't about her at all, but all about Him.  That Jesus Christ loved her so much that He died for her sins and then rose from the dead.  She knew He invited her to rise with Him.  He invited her to rise from the deadness of sins and walk blameless and clean and free into eternity.  She'd accepted it and fallen in love with Jesus and walked with Him for years, but she felt Him asking her to obey Him in this.  To obey Him and be baptized again, now that she truly grasped the concept of all that He had done for her, the true concept of baptism.  It was a physical, outward picture of what had happened on the inside.  She’d known it for years, so why was it now that he was tugging on her heart?  Was it really necessary to go in front of the thousands of people in her church and be baptized?  “It is better to please God than man.”

And so she did it, one Sunday she went forward.  After all these years of being in a close relationship with Jesus, she decided that she would continue to be obedient to Him in all things, even this.  Obeying God and listening to His promptings was more important than what people thought or anything else.

When she was submerged into the water and raised up into freedom from death and sin, she sent ripples through the baptismal waters and through the sea of souls in the congregation.  A man was running late and rushed into the sanctuary just in time to hear the story of her baptism.  His heart stung, because her story was so much like his own.  Her action encouraged his decision to get baptized again, because the sprinkles he'd gotten as a baby had meant nothing to him at the time.  He knew the woman and called her later that day to say thank you.  And there were probably others there that day who were touched by her ripples of obedience and she may never know. 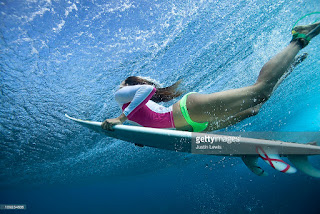 Baptism is like duck-diving, because when a wave washes over you, you feel a sense of a new start.  Something that is coming against you passes and you find peace.  The calmest place on a breaking wave is right underneath.  This was the point of Jesus’s death and resurrection, so that we could find peace in this life and world of sin.  My mom is the woman in this story.  I am so grateful for her example of obedience and the ripples of love and witness that she sent out that day and every day. 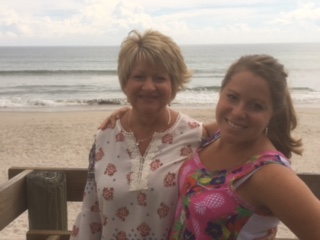