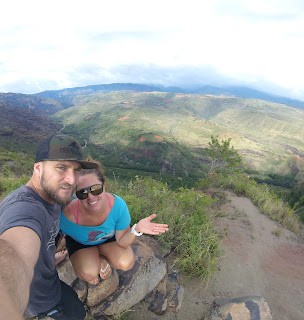 So far, this was not the surf vacation we dreamed about.  By noon on our first day in Kauai we both hoped to be submerged in the sea, making our way back out to another set tingling with adrenaline.  Instead, we were waiting for lunch in a roadside café sheltered from the wind and rain.  Matt and I were deflated and famished.  We’d started the hunt for waves at 7 that morning, driving up the coast and exploring beaches.  Every cove we discovered celebrated the glory of God’s creation with a turquoise sea framed with tropical plants and trees of all shades and shapes.  It felt wrong to be disappointed, but every spot we found was flat.  Being from Florida we were used to small waves, and would have made the most of even 1-2 foot surf, but it was not even rideable.  What baffled us more was that there was supposed to be a giant swell heading in later that day, but there was no trace of it now. 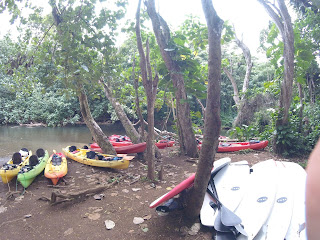 After our meal, I suggested that we paddle up the Wailua River and check out a waterfall.  One of my good friends, Jen, went to Kauai for her honeymoon and recommended many activities, and this was a must see.  Kauai is the only Hawaiian island with navigable rivers.  The Wailua is located on the east coast of the island and is the most well-known. 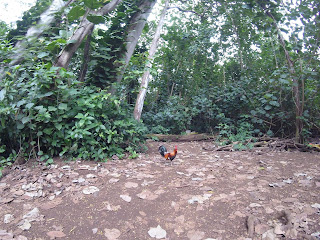 About an hour later, Matt and I were on stand-up paddle boards gliding down the serene river.  We found the sandy bank and left the boards next to other kayaks and canoes that marked the beginning of the trek to the falls.  The rain cleared, and we hiked barefoot through the jungle following a dirt foot path.  We passed clucking roosters and hens and through small, trickling streams.

Finally, we could hear the soothing sound of water rushing down.  The waterfall cascaded down 85 feet into an emerald pool.  Matt and I eased in to the cool water and swam under the shower.  The fresh water poured all over us and washed away any trace of disappointment that we had felt earlier. 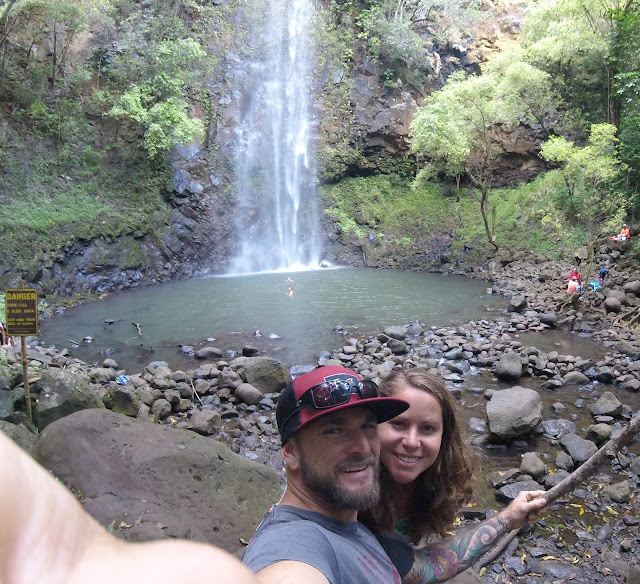 Back on the paddle boards we decided to venture further down the river.  We stopped to explore a fern grotto.  The grotto was a cave abounding with different species of verdant ferns spilling out of every crevice.  Next, we paddled by a couple in a kayak who advised us to continue around the bend.  Sunlight glistened down through a canopy of green and made parts of the river transparent.  Fish darted beneath the glassy surface.  Soon after I paddled around a turn, I saw a wild bull drinking and relieving itself in the canal.  There were more bulls and cows on a grassy patch that bordered the waterway.  Cautiously, Matt and I paddled by.  As Matt slowed to take a photo, the bull stopped drinking the water and stared back at him.  After the face-off, the bull darted up to the meadow and bucked its hind legs high in the air.  It was like we were living an episode of the Discovery Channel, but this felt sacred; this was real life and it was only the two of us to witness it.  Further up to the left I spotted something white move in a pasture.  I paddled around the bend and saw three wild horses galloping through the field.  Matt and I were awestruck by the pure beauty of the untamed nature on the island.  Our first day in Hawaii had been surreal even if we didn’t find surf, and the surf would come. 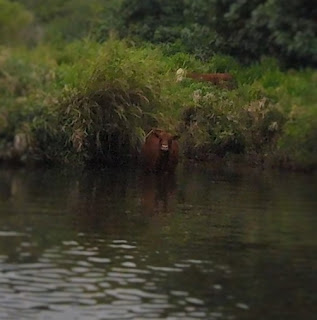 A few days later, we decided to try another must-see from my friend’s list: spend a day exploring the Waimea Canyon and hiking a trail through it.  The canyon is on the western side of Kauai, and is a humbling sight at ten miles long and up to 3,000 feet deep and also home to countless waterfalls.  The drive up the canyon was littered with tourists stopping at look out points.  In true tourist fashion, we got out of the car to drool at the majestic vistas.  I felt so small next to the depths and breadth of the lush canyon and towering waterfalls.  Slowly, we wound our way up to the Awaawapuhi Trail.  The hike was six miles long, and was a sure way to see some of the uninhibited Na Pali coast.  The Na Pali coast is intriguing and mysterious, because it is only accessible by boat, helicopter, or by hiking paths.  It is also known to be the most stunning coast on the island and the site of countless Hollywood films.  The fact that it is a challenge to explore only fueled my desire to see it.

We debated whether or not to do the walk for the first fifteen minutes of the muddy downhill trek.  We’d both slipped and almost fallen already.  Then it started to drizzle.  We agreed that the hike didn’t seem like a safe idea.  We had no cell phone service, and if one of us twisted an ankle and couldn’t walk it would be nearly impossible to make our way out of the trail.  Because of the wet conditions, it was a challenge enough for one person with two functioning arms and legs and a walking stick.  But, this was another must see according to my friend.  If the view at the end of this path was even half as magical as the waterfall we had seen after paddling up the Wailua River, I did not want to miss it.

So, we continued deeper into the woods taking it slow, step by step, constantly working to break a fall.  Frustrated, we started to bicker.  This wasn’t safe.  If either of us did twist an ankle, which could easily happen, that would ruin our surf sessions for the rest of the trip and put a damper on all the other activities.  Why were we still walking?  If we fully committed to the hike, it would have been easier to push forward, but if we were going to quit and turn around the sooner we did so the better.

Another couple emerged from the forest covered in muck.  They trudged uphill almost finished with the climb.  When they passed, we greeted them, and they seemed cheerful enough that we were encouraged.  If they could do it, surely we could. 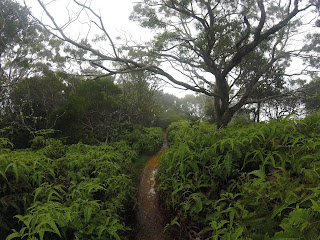 Soon the drizzle turned into sheets of rain.  We stopped to pull rain jackets out of our backpack and sip some water.  Again we questioned ourselves; was this really worth it?  Would we even be able to see the view or would it be hidden by thick clouds?  Suddenly our deliberation was interrupted by a loud screech and curse words.  Just behind us on the footpath was another couple, and the woman had just fell flat on her bottom.  Her face red, she was clearly embarrassed and apologized for cursing.  That was how we met Tom and Mary.
Tom helped Mary back to her feet, and we told Mary not to worry about what she said.  The trek was slick and we had almost fallen countless times already.  We laughed and decided to continue on together.  As we walked, the rain alternated between sprinkling and pouring.  At one point it even stopped long enough to let the sun shine through the canopy for a while.  Conversation flowed as we got to know this couple who were celebrating their 30th wedding anniversary.  The mountains of Lake Tahoe, Nevada was where they called home.  This was actually their first vacation just the two of them, as they had always taken their kids and grandkids with them.  We laughed about family dynamics, complained about work, and shared what we had discovered around the island so far.

We trudged on taking in the views through the dense jungle and the thriving landscape of the Na Pali coast.  It occurred to me how empowering working as a team could be.  The support of others could take impassible crossroads and make them navigable.  Something as simple as a conversation with Tom and Mary distracted our minds from all the obstacles and reasons we should not continue on.  Instead, we kept watch for each other and warned each other of a tough patches in the trail.  Matt and I shared our water to drink and they shared fresh coconut meat to eat. 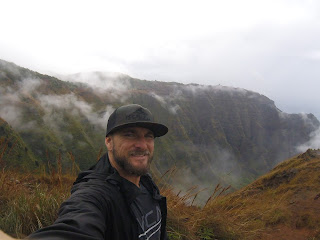 Finally, we made it to the end of the trek.  The clouds cleared long enough to reveal the open panorama of the characteristic green mountain spires.  The height at which we stood was astounding.  The ground was so far down below that we could not even see it.  We basked in the beauty of God’s creation for a while before heading back to where we started a few hours ago.  Although the return trip was mostly uphill it seemed easier.  Since the first half of the trek was mostly downhill and so muddy and slippery, we had to go slow and take every single step carefully.  Going uphill, we could go much faster since we didn’t have to focus so much on not falling.  This time, gravity was on our side.  The entire hike took four hours to complete. 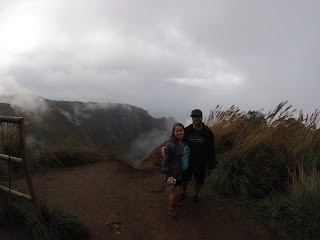 At the end of the trail, we hugged Tom and Mary.  The experience we shared had transformed us from strangers to family.  Matt and I admitted that if we hadn’t met Tom and Mary we probably would have turned around.  Tom and Mary said the same thing.  God’s words rang out in my mind: two is better than one, but three or four is even better.  The verses in Ecclesiastes 4:9-12 say, “Two are better than one, because they have a good return for their labor: If either of them falls down,one can help the other up.  But pity anyone who falls and has no one to help them up.  Also, if two lie down together, they will keep warm.  But how can one keep warm alone?  Though one may be overpowered, two can defend themselves.  A cord of three strands is not quickly broken.”

The longer I am alive, the more I see God’s living word in my life each day.  I am thankful for such a clear illustration of how united, people are so much stronger and can accomplish much greater things. 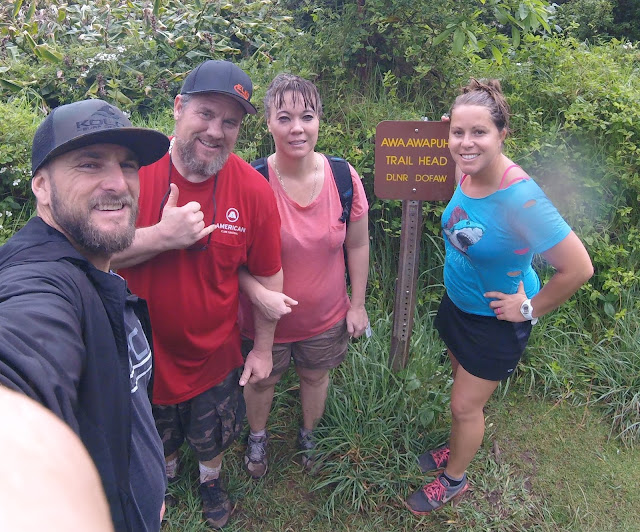