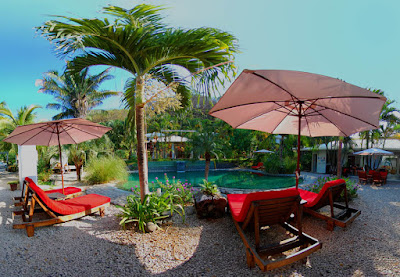 With the speed we took each dangerous curve I felt my mortality; knew that if we met another force at one of the blind spots it would be over.  Were we going to die here?  Surely we wouldn’t be the first.  I prayed as we rounded each corner.  On a straight stretch of the path a motorcyclist clutching a surfboard passed us going in the other direction.  When we rose higher than the birds, I looked down on green palms and rolling hills and saw the ocean lining the horizon.  Would this be the last view I saw?  Was I meant to die holding on to my groom?  I prayed for more time.  Why couldn’t I just let go and enjoy flying over the mountain?  Maybe because now I had something to lose. 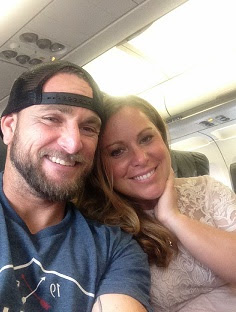 Two days after our wedding, Matt and I flew to San Jose, Costa Rica.  From there we took a 25 minute flight on a tiny plane to a tiny airport close to our destination, Mal Pais.  Upon arrival to The Place, our hotel, we were welcomed with cool, refreshing watermelon smoothies.  Our bungalow was quaint and quiet, nestled in lush, tropical nature complete with howler monkeys and hummingbirds.  The scene matched my ingrained notion that a honeymoon was meant to be luxurious and carefree, and that we were supposed to be pampered.  While luxury and pampering sounded nice, Matt and I had not chosen Costa Rica so that we could relax and lazily lounge around a pool for a week.  Indeed I had met my match in Matt, and we were much more concerned with exploration and discovering new surf spots and then getting to them before the wind. 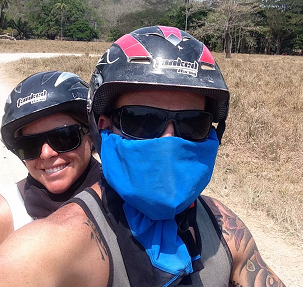 We rented a four-wheeler that would enable us to take the narrow dirt roads that branched off the main road and gain access to any wave.  Our chariot came with two helmets and no place to lock things up, so we bought cheap flip-flops and sunglasses for our surf sessions so we wouldn’t care if they were stolen when left unattended.  We quickly realized we’d need bandanas to cover our noses and mouths to minimize breathing in dust, so we fashioned our own out of my tank-tops.

Our honeymoon fell during the hottest time of the year when the sand punished our toes, thirst and sweat were constant, and the only respite was found underwater.  The first day we surfed and explored the small pebble roads that led to various beaches, but knew there had to be something more.  The beach break was closing out and the rocky reef built fast and then offered a nice wall, but died right away; probably not the right swell direction for that wave.  Under a golden, amber, and baby blue sky we ventured down another road that dead-ended into a fishing village.  That was where we found the stand-up paddle board rental shop and wandered into its cool shadows.  Edith was a tall, slender Costa Rican whose muscular frame rested in a chair behind glass cabinets filled with shiny trophies.  We started a conversation and she kindly shared the coveted information we needed about the waves in the area.  Two right points would probably be working with the current swell direction, and there was one just over the other side of the hill that was never crowded.  Blessed with priceless local knowledge our surf plans were set for the next few days. 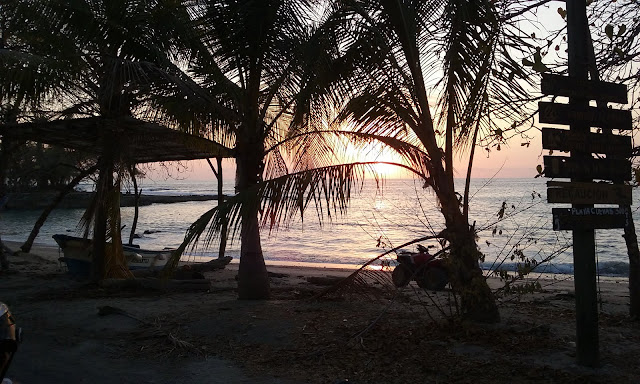 Awake before the sun the next day, we began to climb the towering hill as light filtered through the jungle leaves.  Birds glided above us as we took each curve with similar speed.  As we rode, the path snaked up the hill and as we twisted along the corners there were countless moments when we couldn't see if another vehicle was coming.  I couldn't hear another vehicle approaching over the humming of our engine, and we didn't have a horn to alert oncoming traffic.  We continued down the unknown road without two essentials to driving: sight and sound.

I asked God to protect us as we flew down the hill.  Finally, when we reached the bottom and found the right point, the surf was small and we weren't even sure if it was rideable.  At least we had plan B, the other right point to explore.  I dreaded the drive back, and with every corner I anticipated death.  I never thought I would spend so much time on my honeymoon thinking about the end.  I clutched Matt close and prayed, and heard a clear but gentle whisper tell me to let go of the fear and anxiety.  Even though it is true that many people have died on that road, we never had any close calls, and I give God the glory for keeping us safe.

Turns out that our life has been full of blind spots.  Each day brings new uncertainties and we find ourselves constantly repeating the phrase “one day at a time.”  It started with those winding dirt roads in Costa at full speed as we took on one corner at a time and I learned to surrender fear and anxiety and trade it for faith and trust.  Reality found me a far cry from what my expectations were of a honeymoon, covered in dirt or saltwater unless asleep, and rounding corners that carried the weight of death.   Even though expectations and reality didn't usually match up I have peace knowing God is in control.  He knows our future, it is in His hands, and I trust Him.  (Jeremiah 29:11)

The four-wheeler puttered through a twirling dirt tornado, the wake from another vehicle that vanished as fast as it bounded around the corner.  The clouds of dust rose like smoke above the palm fronds and dissipated.  Blanketed in grime and sweat, the dire sun aggravated my itchy, sunburnt skin.  I held Matt tight as he steered onward to where we would escape the heat and duck dive the muck away surfing on a long, fun right point break. 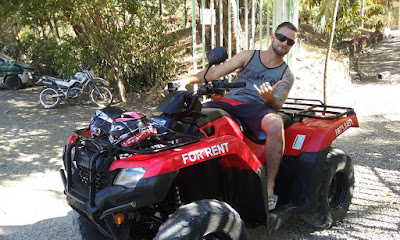 Blind spots make you consider how much you value life,
when at any moment head on collisions are possible,
lurking around the corner,
there is nothing you can do to prepare.

Dust born from the progress and friction of our tires
as they meet the dirt and gravel road.
Dust dances inexhaustibly and we breathe it in
turning our snot brown.

Existing in the realm of possibility,
of ‘maybe not today,’
the mystery of blind spots is
no one knows when the dangers will come.

Our fate fragile, we hold on tight, and take turns that make us vulnerable.
Do you persist because you trust?  Because you have faith?
Or simply because time works this way, it moves forward
and there is no other option or direction to go.